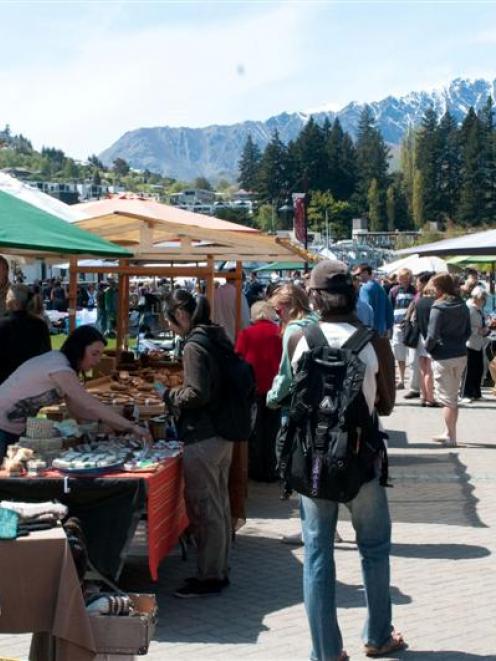 Organisers are encouraging people to get to the markets early to beat the rush.

Father Christmas will return to the new Remarkables Market, in the Remarkables Park Town Centre, on Saturday, December 18, from 10am to noon.

The market runs every Saturday from 8am to 1pm, apart from Christmas Day and New Year's Day, until the end of April.

Remarkables Park special projects co-ordinator Olivia Porter, of Frankton, said Christmas decorations, ceramics, puddings, hampers, strawberries, gooseberries and specials would be on offer from about 40 stalls, after another "massive" turnout by the public last Saturday.

About 17 of the weekly summer season Queenstown Farmers' Market stallholders will open for business for the Christmas Twilight Market, in the grounds of St Peter's Church, on Wednesday, December 22, from 4pm to 7pm.

Market manager Sharlene Inch, of Queenstown, said the cherries, hams, new potatoes, cakes, tarts, flowers and the increasingly popular smoked salmon from Stewart Island would be in store, "so people can get the freshest produce possible for Christmas".

The second annual twilight market would have a festive theme, with live music. The farmers' market resumes on Saturdays, from 9am to 12.30pm, on New Year's Day until the end of March.

The Wednesday market operates from 9am to 3pm, in addition to the traditional Saturday arts and crafts market, which has operated for more than 15 years.

Market manager Jasmine Clark, of Arrowtown, said the festive market, with live music, would be followed by Wednesday markets on January 12, January 26, February 23 and March 9. The extra markets were designed to capitalise on the summer waves of tourists.