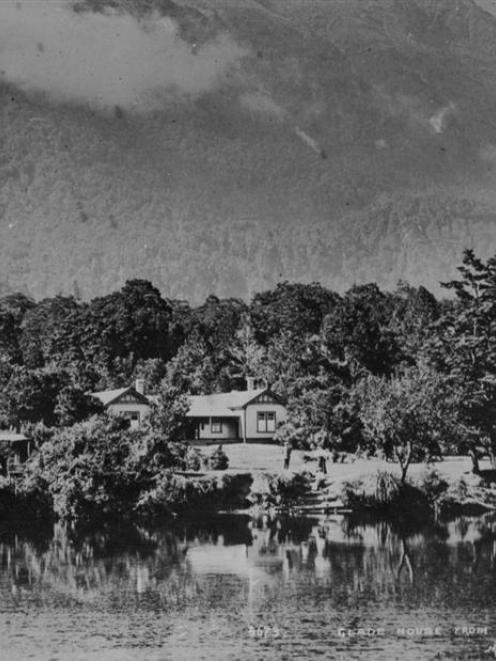 Glade House at the head of Lake Te Anau, in a photo taken in 1906 by Central Otago photographers Muir and Moody. Photo supplied.
A snapshot of Glade House, taken more than a century ago, has come to light.

Glade House marks the start of the Milford Track at the head of Lake Te Anau.

General manager of guided walks company Ultimate Hikes Noel Saxon received a copy of the photo, which was taken in 1906 by Central Otago photographers Muir and Moodie, late last year.

The sender was Iris Garvey, of Westport.

Mrs Garvey's husband's grandfather was John Francis Garvey, who built the original Glade House with his wife Louisa as a holiday house for tourists in 1895.

Mrs Garvey said the couple came from the UK, and on seeing the area on their first trip to the head of Lake Te Anau, Louisa was reported to have said, "We could build a little house in this glade and call it Glade House."

Constructed by builders from Dunedin, Glade House was only used for five months of the year, as the area was closed during the winter.

Mr Saxon said the photo was a reminder of the vision of early settlers, who recognised the beauty of the region they lived in and opportunities for early tourism.

"Even way back then, this young English couple knew this spot was something quite special that would attract visitors from all around the world," Mr Saxon said.

"We like to think we're carrying on their vision by continuing to host visitors in today's warm and welcoming Glade House, much as they did."

Glade House is now operated as a lodge for trampers walking the Milford Track, and is the first stop on Ultimate Hikes' guided walks.