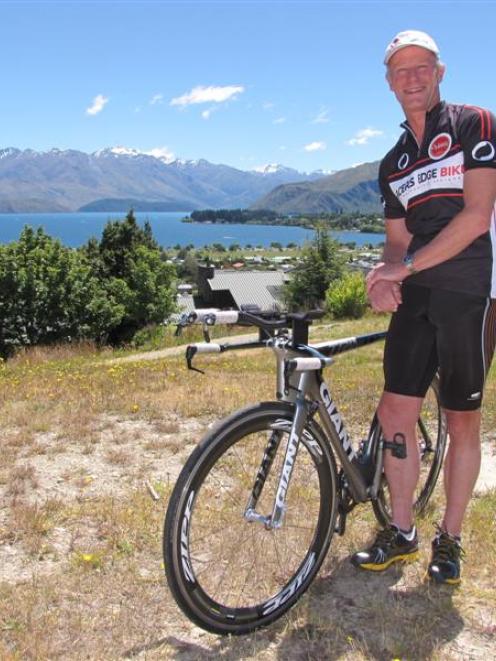 Wanaka GP Andrew McLeod hopes to complete a double-length Challenge Wanaka long-distance triathlon on January 18 and 19, which will require him to swim 7.6km, bike 360km, and run two marathons, or 84.4km. Photo by Lucy Ibbotson.
Getting up at 3am to cycle to Dunedin is all in a day's training for Wanaka GP and multisporter Andrew McLeod (53), who is ''reasonably confident'' he can complete a double-length Challenge Wanaka long-distance triathlon in 10 days' time.

''Otherwise I wouldn't be doing it. But it's going to be a long walk at the end, I think,'' he said yesterday.

Dr McLeod will begin his epic journey mid-afternoon on Friday, January 18, with a 7.6km swim, before biking 360km through the night, then setting off on two back-to-back marathons (84.4km) just as the actual Challenge Wanaka start gun goes off at 6.30am on Saturday.

Why put himself through it? That is the question most people ask when he reveals his ambitious plans.

''The honest answer is that when I lined up to do my first Coast to Coast there was just a wee tremor of excitement about 'will I finish this or not?' ... and it was the same with the first Challenge.

''Having done half a dozen now, I know that I can get through it ... but it's quite nice to put yourself out on a limb ... it's all about testing that wee bit of fear that I might not succeed.''

While his target time is within 30 hours, he would be satisfied with crossing the finish line ''before the fireworks go off'' when the course closes at 11.30pm.

Dr McLeod's training has been limited to 15 hours a week for the past six months, usually late at night or early in the morning, as he works up to 55 hours a week. However, he has experience on his side, having completed the full Challenge Wanaka four times, Challenge Roth twice, finished six 24-hour races, five Coast to Coasts, and run about 30 marathons - including three in four days in 2010 and four in a week 10 years ago. He has also competed in several Godzone and Southern Traverse adventure races, which take up to five days.

''They're of similar intensity but you've got a team with you.''

While this will be his toughest individual challenge by ''quite a considerable stretch'', he will have plenty of support, including his wife Karen and trainer Val Burke.

From a medical perspective, Dr McLeod considered just about anything possible.

''That's part of the joy of doing these things is discovering the gift of the body we've got. If you take time to look after yourself and train well, we're all capable of more than we give ourselves credit for.''

''He's very very fit and he's very strong mentally and he's got a good support crew to help him on his way.''