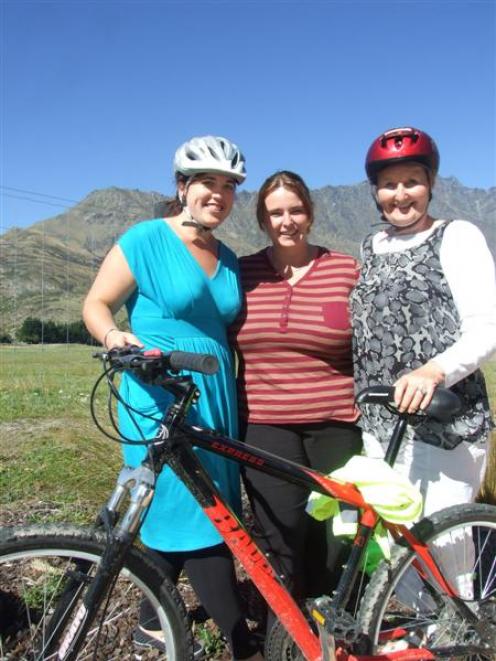 Half of the winning 2012 Bike Wise Challenge Public Health South Queenstown team (from left), Susan Auty, of Fernhill, Jodi Yelland, of Wanaka, and Ann Fowler, of Arrowtown, celebrate their first place in the three- to six-person category. Also part of the team were Marie Roxburgh, of Cromwell, Frederique Gulcher, of Lake Hayes Estate, and Sam Mangai, now of Port Chalmers. Photo by Joe Dodgshun
Public Health South Queenstown has reclaimed its title as king of the commute, topping the three- to six-person category of the Bike Wise Challenge for the second time.

The challenge pits New Zealand organisations against each other to see who can get the most staff to ride a bike for at least 10 minutes or 2km.

The six-person team cycled a collective 1237km during February, saving the equivalent of 298kg of carbon dioxide from vehicle emissions.

Team co-ordinator Susan Auty said the office was delighted to take home the top honours from healthy competition and reclaim the title it first won in 2010.

Ms Auty said they missed the 2011 title because with people were away at the time of the competition, but they were happy to get back into competition, especially with rivals at the nearby pharmacy.

Also in the winning team were Jodi Yelland, of Wanaka, Ann Fowler, of Arrowtown, Marie Roxburgh, of Cromwell, Frederique Gulcher, of Lake Hayes Estate, and Sam Mangai, of Port Chalmers. She said the standout performer in the team had been Mrs Fowler.

"She cycled, rain or shine, every day of the week and the only day she didn't cycle was when her cycling clothes were still wet from the day before," Ms Auty said.

For their efforts, the Public Health South Queenstown team will receive a morning tea shout, framed certificate and "bragging rights as the most cycle-friendly organisation in the area".