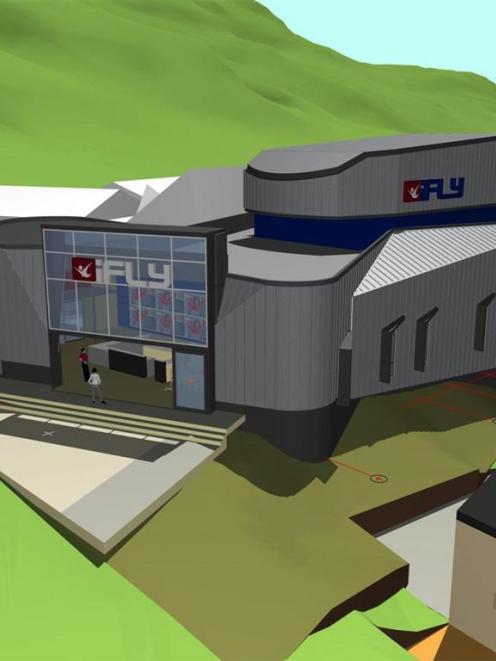 An image of the proposed iFLY facility due to open in Queenstown next year. IMAGE: SUPPLIED
It has had to be revised considerably, but New Zealand's first indoor skydiving centre is expected to open in central Queenstown early next year.

The $15 million iFLY facility has been given the go-ahead by a resource consent commissioner for a prominent site in Brecon St.

It will feature a vertical wind tunnel which creates a cushion of air people can float on.

The project is a joint venture between Auckland couple Emma and Gary Beyer and wind tunnel manufacturer SkyVenture International.

‘‘It's a pretty major construction and there are lots of variables but that's the plan.''

They attract on average about 150,000 customers per site each year, although Queenstown's iFly would be a custom design and one of the smallest.

The building would be on a site surrounded by the Queenstown Medical Centre, Bespoke Kitchen cafe, Caddyshack City mini-golf course, Queenstown Fire Station and an electricity substation.

It required consent, as it would be used for a commercial recreation activity and breaches zoning regulations - at 15.3m high it would be more than twice the height permitted in Brecon St's high density residential zone.

It would also be longer than planning rules permit with only half the car-parking required.

‘‘We made quite a lot of revisions but we're happy to do that,'' Ms Beyer said.

‘‘We have certain limitations [due to the activity] but we've tried to make it fit seamlessly with the surroundings and neighbouring buildings.‘‘We want to be welcomed by the community and seen as a real positive.''

Some neighbours raised concerns over shading, congestion, visual effects and noise from the fans, which send air shooting through the tunnel at up to 250kmh.

But hearing commissioner Andrew Henderson agreed with council and applicant planning experts the adverse effects would be ‘‘minor or less''.

Mr Henderson said no other party presented expert evidence at the hearing.

He accepted the building's bulk was ‘‘driven by the functional need of the activity'' and therefore granting consent would not set a precedent.

The facility will create 20 jobs during construction and 25-35 part-time and full-time jobs once complete.

Paul Early, of the New Zealand Parachute Organisation, supported the application, saying it would benefit the country's skydivers, youth development and tourism.