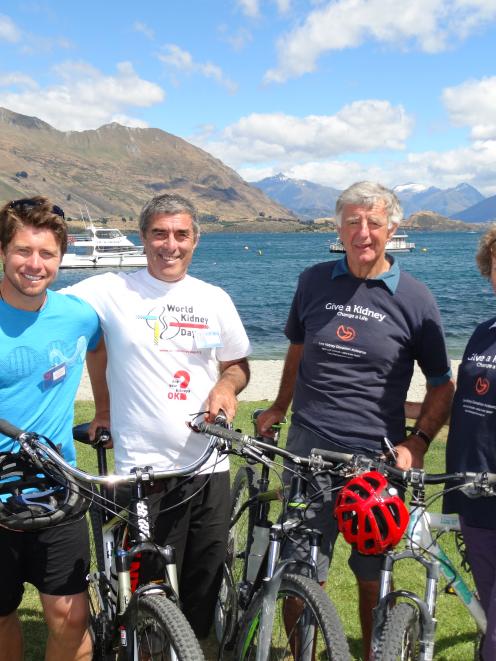 Wanaka father and son Richie (32, left) and Rob Johnston (60), and Whangarei couple Hugh (70, second from right) and Ros Cole-Baker (65), have a shared goal to promote live kidney donations. Photo by Lucy Ibbotson.
A Wanaka father and son and a Whangarei husband and wife who were previously strangers connected over kidney transplant success stories at the weekend.

Ros and Hugh Cole-Baker are travelling the length of New Zealand, loosely following the 3000km Te Araroa trail, to raise awareness of the need for more live kidney donors and help reduce the waiting list for those needing a kidney.

Mrs Cole-Baker gave her husband one of her healthy kidneys 15 months ago, after he spent 10 years struggling with kidney disease, resulting in renal failure and the need for dialysis.

''I just wanted him well so it was an easy decision,'' she said.

Rob Johnston, who received a live kidney donation from his son Richie just over three years ago, read about the Whangarei couple's travel plans in The Renal Messenger and got in contact, inviting them to stay at his bed and breakfast when they passed through Wanaka.

The Otago Daily Times caught up with the Cole-Bakers and Johnstons on Saturday after they returned from a bike ride and walk up Mt Iron together.

The Cole-Bakers said they were inspired to embark on their ''Walking New Zealand for Kidneys'' challenge by walkers on the Te Araroa trail, which goes ''right past our place''.

They wanted to show others that being a donor ''wasn't going to be a huge setback and also there was life after a transplant'', Mr Cole-Baker said.

Since leaving Cape Reinga in September, Mrs Cole-Baker has been travelling south mainly on foot and by mountain bike, while Mr Cole-Baker supports her efforts from a campervan.

He has joined her on some of the cycle legs though, after buying a mountain bike in Palmerston North.

The couple said they had enjoyed many ''humbling'' and ''incredible encounters'' with people along the way who wanted to hear their story and share their own experiences - such as the Johnstons.

On Saturday, the four new friends all reported a return to full health as a result of their transplants.

''We couldn't be doing something like this [travelling New Zealand] otherwise,'' Mr Cole-Baker said.

''We'd have to bring a [dialysis] machine with me and I wouldn't have had the energy anyway.''

Rob Johnston's assessment of his transplant was simple.

Snowboard instructor Richie Johnston said he had now adopted a healthier approach to life, in terms of eating the right things and staying active, and giving a kidney to his father had not slowed him down.

People could wait up to eight years for a compatible kidney from a deceased donor, which was ''too long for some'', Mr Cole-Baker said.

''So the big advantage of a live donor, if it's compatible, is it's within a year or so.''

The Cole-Bakers headed to Arrowtown and Queenstown after leaving Wanaka on Saturday afternoon.

They expect to complete their journey next month with a group of Invercargill people on dialysis who will walk with them to the finish line at Bluff.