Lake dive for engine just another day at the office 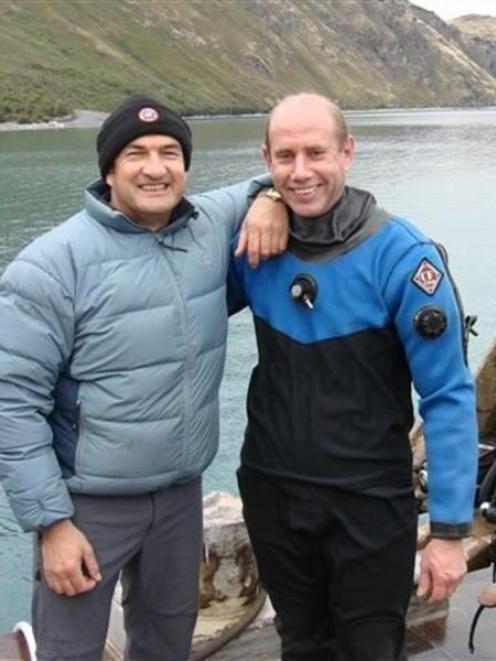 Bill Day (left) and Dr Simon Mitchell during the dive for Haast pilot Morgan Saxton's helicopter engine. Photo by Toby Wallis.
Sir Edmund Hillary's famous phrase "we knocked the bastard off" continues to echo for generations of adventurers, and none more so than deep-sea diver Bill Day (51), of Wellington, and soon to be of Wanaka.

Top on his list of "bastards" is the wreck of the General Grant, which sank in the treacherous waters off the Auckland Islands in 1866, reportedly with a large cache of gold on board.

Now, Mr Day, the founder of Seaworks Ltd, has added the missing engine from the late Morgan Saxton's Robinson 22 helicopter to his list.

A 74m retrieval attempt last weekend by his friend and colleague, Auckland deep-water diving specialist Dr Simon Mitchell, is believed to be the deepest dive in the lake.

A second attempt is to be made this weekend.

Retrieving the engine is something Mr Day wants to do for his newly-adopted community and the Wallis family, which is spearheading the retrieval attempts.

Getting the engine back would have meaning for Mr Saxton's family and friends, as well as help Transport Accident Investigation Commission inspectors complete their report into the November 1 accident, Mr Day said.

"The reality is, I am a recent arrival and very junior member of the community and it is nice to be able to give something back," he said.

Mr Day and his wife Karen intend to move permanently to their Mt Barker home after their youngest son finishes school this year.

In November, navy and police dive squads refused to put a diver 74m below the lake surface because regulations did not allow the use of mixed gases.

But they could not afford a commercial-scale exercise with decompression chamber and dive bell.

Nevertheless, the navy and police were able to retrieve Mr Saxton's body and some pieces of helicopter using a remotely-operated vehicle and a "Kiwi number-eight wire" hook invention by local diver Brent Pihama.

Recent changes in breathing apparatus computer technology meant the deep dive could now be done recreationally by skilled divers, without the costs of a commercial operation, Mr Day said.

The Saxton engine dive required the same research and planning as a treasure hunt, before Dr Mitchell was sent down, Mr Day said.

In the Auckland Islands, the water was not so deep but it was cold, remote and rough.

The challenges in Wanaka were the depth of the lake and the altitude, putting extra pressure on Dr Mitchell.

He carried a mixture of helium and oxygen in tanks, with three different computer systems mixing it.

If the computers "disagreed" about the gas mixture, they were programmed to go with a "majority decision".

If that system failed, Dr Mitchell had a manual mixing system with him.

If that failed, he was carrying additional premixed canisters on his hip.

If they failed, then a diver on the surface monitoring Dr Mitchell was ready to take down more gas.

Under the system used, divers had up to 12 hours of breathing time, irrespective of the depth they reached.

But it was a "real step up" from scuba diving and divers who used the system had to be trained and experienced in using the gases, Mr Day said.

Dr Mitchell spent 20 minutes on the lake bottom last weekend but could not see the engine because of poor visibility.

It took nearly two hours to bring Dr Mitchell back to the surface slowly, allowing him to decompress and avoid sickness.

It was cold - about 11degC - but Dr Mitchell and Mr Day have worked in colder temperatures.

We have had a lifetime of doing this type of thing together," Mr Day said.

The retrieval team did not have one because Dr Mitchell could dive to the depth required, and in better conditions stood a very good chance of finding the engine, Mr Day said.

"The reality is, we had a lot of fun," Mr Day said of the operation last weekend, involving four helicopters, a digger, several trucks and a barge.

"At first, it seemed quite disrespectful [to Mr Saxton] but then as I learned more about him I realised it was something he would really enjoy."

Using the digger bucket to scoop the tank-encumbered Dr Mitchell in and out of the water appealed to Mr Day, who had never seen it done before.

Cages are more commonly used in his line of work.

Now, Mr Day is putting his mind to another attempt within the next two months.

He is also planning his fourth expedition to find the General Grant this summer.

Diving has been Mr Day's passion since he was a psychology student at Victoria University and met a diver called Sally, who was not interested in him.

He does not know what happened to Sally, but is forever grateful to her, he said.

About the same time, he met Dr Mitchell (51), who also became a deep-sea diver, life-long friend and is a specialist in hyperbaric medicine.

Mr Day said he did not want one cent for his work for the Wallis family, although he admits to a certain gold-fever where the General Grant is concerned.

"It is all about knocking the bastard off," Mr Day said.