Learning from the big flood 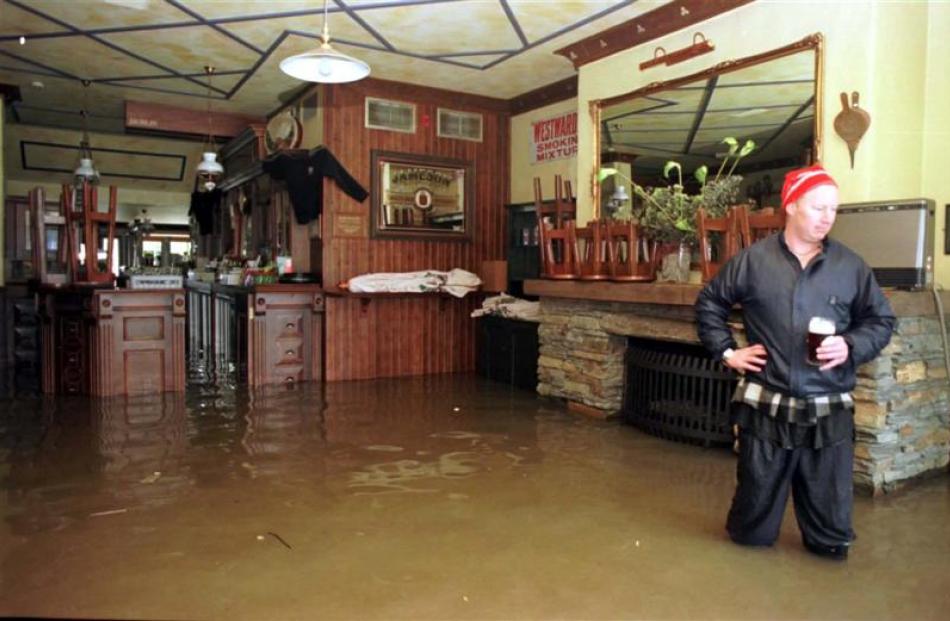 Pog Mahones bar worker Paul Murphy surveys flood damage in the Rees St bar during the 1999 emergency. Parts of the interior can now be quickly dismantled and removed if a flood threatens. Photos by ODT. 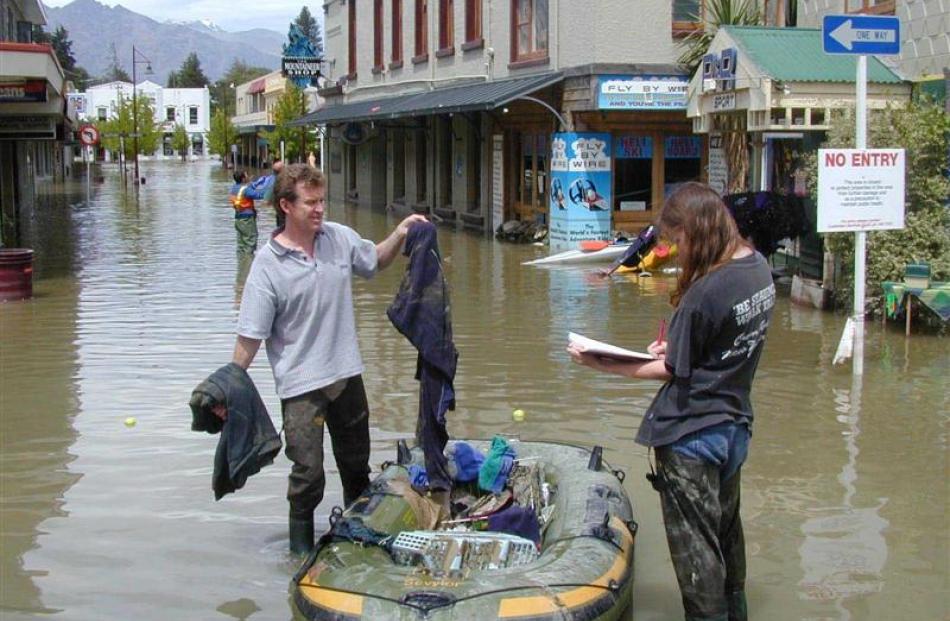 Ian Bell and Sonya Tamblyn clean up outside their Rees St store. 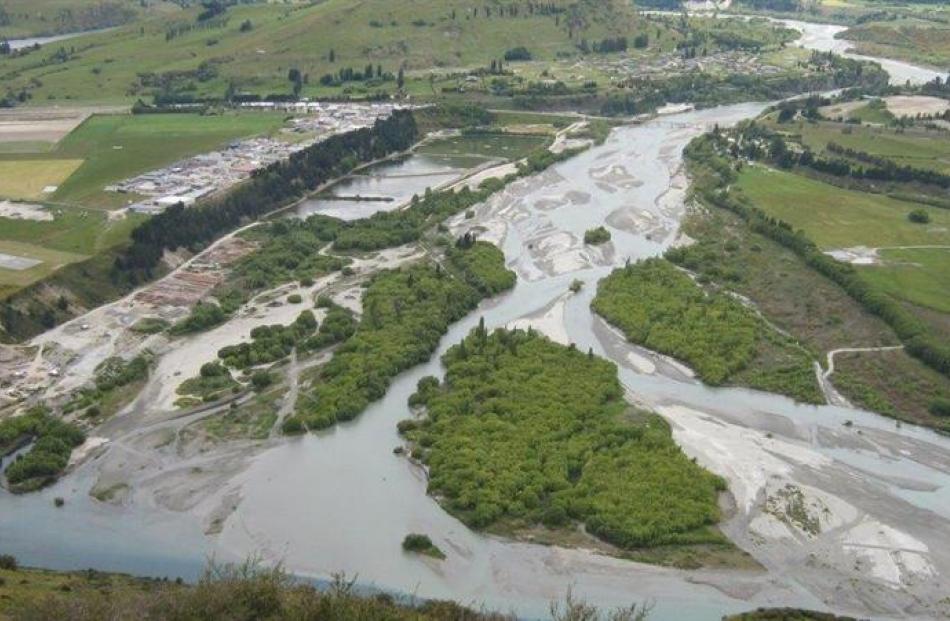 The Shotover River delta in 2006, before the construction of the training line. Photos by ORC. 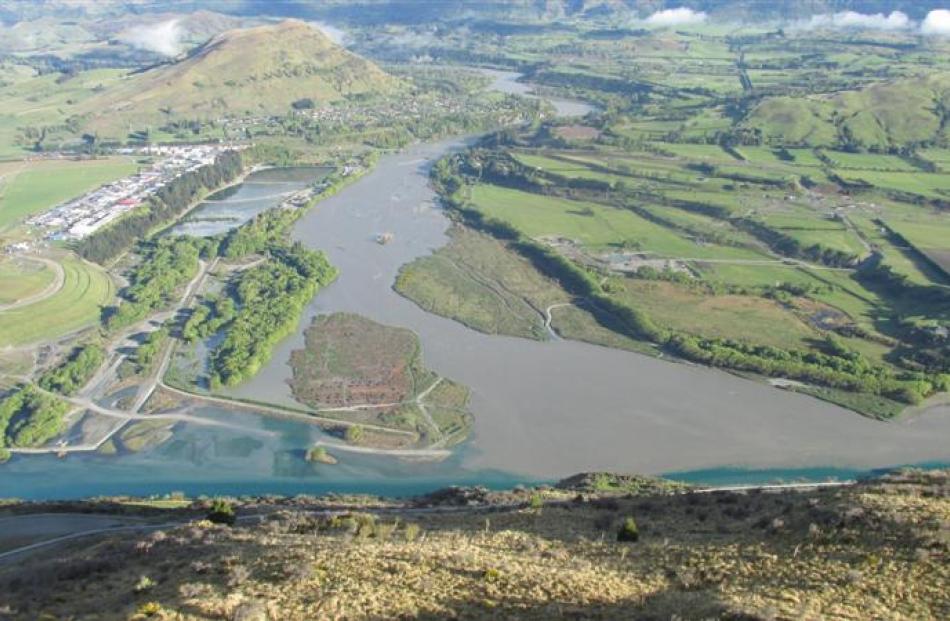 The delta as it is today.

Fifteen years ago on Monday, Lake Wakatipu, swelled by 350mm of rain which fell in its catchment over three days, burst its banks and flooded Queenstown's central business district. Guy Williams looks back on the anniversary of that natural disaster and examines how the resort is protecting itself from another big flood.

Few places in the world have been blessed by Mother Nature like Queenstown.

Its mountains, lakes and rivers have been exploited for wealth and pleasure. For the lucky, even the dirt had a golden glow.

But 15 years ago on Monday, Mother Nature turned against New Zealand's favourite holiday resort with a vengeance.

On November 17, 1999 - a Wednesday - during three days of almost continuous rain that dumped 350 millimetres in Lake Wakatipu's headwaters, the lake rose above danger point. Chaos ensued, and the result was a repair bill of more than $50 million.

With hindsight, no-one should have been surprised, because Lake Wakatipu has a history of flooding.

The big daddy of them all, the 1999 event, is often referred to as a 1-in-150-year event, but a flood on that scale hardly seems to require the stars and planets to align.

If a series of northwesterly fronts bring heavy rain over the lake's headwaters for just a few days, then the rivers flowing into the lake rise steadily. Add spring snow melt and they rise faster still.

On the other side of the equation, Lake Wakatipu has a double bottleneck. While several rivers flow in, only one, the Kawarau, flows out. Four kilometres downstream from the lake, the Kawarau is joined by the Shotover River, which, if it's also in flood, acts as a gate, limiting the volume of water flowing out of the lake.

The problem was that most people were surprised and ill-prepared. No sooner had the lake receded than the debate began about what to do about the flood risk.

Former Queenstown Lakes District Council (QLDC) chief executive Duncan Field has a handy perspective on the debate. His tenure began a year before the flood and finished in 2011, the year the Shotover Delta training line was completed. In 2004, during the height of the debate, a slightly exasperated reply by Mr Field to an Otago Daily Times letter writer lays out the options: ''There are only four ways to address the flooding issues in Queenstown - raise the town, lower the lake, build walls, or leave [it] to individuals to make their own plans.''

With the exception of lowering the lake, which was suggested and rejected, the response to the hazard has been multi-pronged, he says.

In 2006, the Otago Regional Council (ORC) and the QLDC produced a joint document called the ''Learning to Live with Flooding Strategy''. The clue is in the title: in a departure from the historical belief that flooding could be controlled through physical engineering solutions, the document provided a framework for the councils to work together to improve community preparedness.

That meant better understanding the natural processes involved, improving warning and prediction systems, and encouraging business owners, landlords and homeowners to make their own contingency plans.

Mr Field said that approach did not, and still does not, satisfy everyone, but a ''huge amount of work'' was done on practical solutions. Basic infrastructure in the CBD, such as on the sewerage system, had been ''proofed'' against the disruption caused by flooding, while ground levels had been raised at points near the waterfront.

The idea of building a permanent flood wall was examined in ''excruciating detail'', but proved to be impractical: ''All the evidence said the hydrostatic pressure would force water under the wall.''

''Everything that was practical to be done, then and since, has been done.''

There had also been an understandable resistance among residents to councils spending rates on expensive geotechnical solutions. If they had sensibly bought property above the flood zone, ''why should I contribute to the problems of people who were silly enough to build down low?'' he says.

The only major physical engineering response to the flood risk has been the construction of the Shotover River delta ''training line'', so-called because its function is to train the river to flow into the Kawarau at the eastern, or downstream, side of the delta rather than on its western, upstream side.

Completed in 2011 at a cost of $1.5 million, it is made from sand and rock, and looks like a stock or flood bank extending like a causeway across part of the delta.

The ORC's director of engineering, hazards and science, Gavin Palmer, says the training line does not eliminate the flood risk but it is meant to ensure it doesn't get any worse.

Modelling work in 2005-6 showed the level of Lake Wakatipu could be influenced by where on the delta the Shotover entered the Kawarau.

''If you make the delta more open, sediment that comes down in a flood will tend to settle out on the delta rather than getting pushed into the Kawarau and acting as a blockage,'' Dr Palmer says.

Although its effectiveness has yet to be tested by a large flood, the ORC was ''pleased with what we saw'' during the most recent high lake level, early last year.

Skyline Enterprises, which bought up many waterfront properties after the flood, has its own flood barrier. First erected during a minor flood in 2010, it can extend more than 150 metres from the Eichardt's building to Earnslaw Park if fully deployed. Skyline Enterprises chief executive Jeff Staniland likens it to an insurance policy.

Rather than trying to keep the lower CBD bone-dry in a major flood, its purpose is to ''buy time'' during a smaller flood. Pumps would keep the water level behind the barrier as low as possible, for as long as possible, to minimise damage and disruption, he says.

''We took the view that we've got to look after ourselves - we've got most of the buildings along there.

''If the flood's big, it's not going to do any good, but if there's a smaller encroachment, a barrier would give the lake time to drain.''

Dr Palmer says the barrier's effectiveness will depend on the scale and duration of a flood, as well as factors such as waves.

Such barriers were the subject of an expert's technical report commissioned for the joint flood strategy in 2006. It found that to hold back a ''reasonably high'' water level for a certain length of time, a flood barrier would need a compatible foundation structure to ensure ''stability of the subsoil'' - in other words, to stop the water forcing itself underground and into the CBD.

The ORC said the risks outweighed the potential benefits, and decided against exploring the idea further.

Dr Palmer says the most crucial work the two councils have done is to raise awareness and provide information to help people prepare. Public awareness sessions continue to be held each spring in Queenstown, Wanaka, Glenorchy and Kingston.

Strong feelings about Queenstown's flood preparedness seem to have faded away over the years. Those who came down in the last shower will give you a vacant look. Those who were here in 1999 tend to give a knowing chuckle and mumble something like ''Mother Nature will have her way''.

Some even say we are overdue for the next big one.

Good little story Guy. It was a memorable time, that's for sure. Just a note..... It wasn't just the 350mm over 3 days, the flood really came about following a huge rainfall a week or two earlier, in the backcountry, which had saturated the ground and when the next lot fell it ran straight off into the lake. It was also unusual in that all the rain fell in the same areas of the catchment - twice.....!