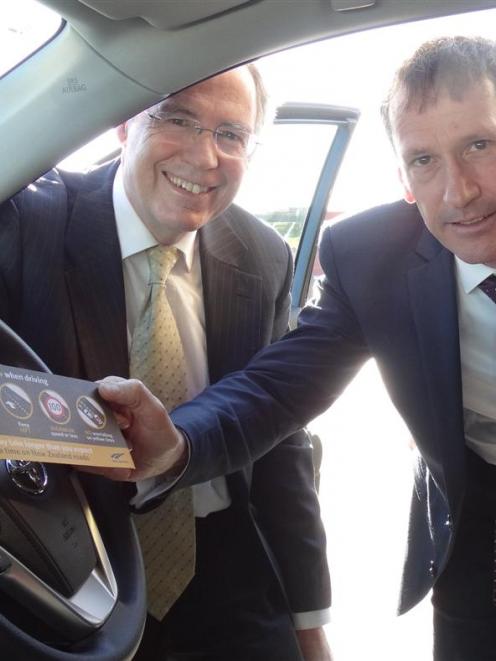 The tags, which carry safety messages for drivers, were jointly developed by the RVA and a range of tourism and transport safety agencies as part of the Government's Visiting Drivers Signature Road Safety Project and were trialled in Queenstown following a launch in June.

Additionally, Rental Vehicle Association chief executive Barry Kidd said other initiatives were under way or about to begin, including amendments of the associations' rental vehicle agreements which would make it easier for operators to immediately cancel contracts if the hirer's driving posed a danger to themselves or others.

''The association is also looking at ways of making it easier to alert other rental vehicle operators who attempt to hire vehicles from them,'' Mr Kidd said.

The Tourism Industry Association also announced yesterday it was leading the development of a new website which would provide information about driving in New Zealand to visiting drivers at three key stages of their travels - before they arrived, when they picked up their rental vehicle and during their journey around New Zealand. The website is due to be launched early next year.

Other agencies supporting the initiative included the Queenstown Lakes District Council, which had arranged for some of the safety messages to feature on the back of buses in the resort throughout January and February and was also planning a summer safety campaign, providing road conditions and other information, including sites of road works.

TIA has also called for tourism operators around the country to play their part in the campaign, citing a ''duty of care'' to give visiting drivers advice and guidance.

The association had developed a toolkit for accommodation providers and others who deal with tourists to help educate them further about driving in New Zealand.

Mr Harland told the Otago Daily Times yesterday members of the road safety project were pooling their collective ideas to reduce serious and fatal crashes on New Zealand roads - including those caused by New Zealanders.

''Those messages, if we all do them well, are going to assist with the road safety on the New Zealand road network ... doing the basics right is the whole point.''

TIA's advice to its members was to assess driving skills and fatigue levels at the point of hire to assist people to pick the right vehicle and develop an appropriate travel plan.

''[In] some cases they might even take them for a test drive around the block,'' Mr Harland said.

The Ministry of Transport was ''thinking about'' introducing a driving test for overseas nationals hiring a car in New Zealand, but it could have implications for New Zealanders wishing to drive in other overseas countries who were signatories to the Geneva Convention on road traffic.

''The question is, when we're under pressure, we've got an extreme decision - an instant decision - to be made, we'll often revert to what is instinctively what we know.

"That means if you're not used to driving on the left-hand side of the road, then you might make the wrong decision and that's just simply because you revert to what you know under pressure, and that's just natural decision-making.''

Another challenge was overseas drivers on quiet roads with no cars to follow.

The project would continue, with a public meeting in January where funding for the visitor drivers project would be discussed as part of the Regional Land Transport plans and, if approved, go for national discussion.

He said the campaign seemed to have brought with it a downward trend in serious crashes involving overseas drivers.