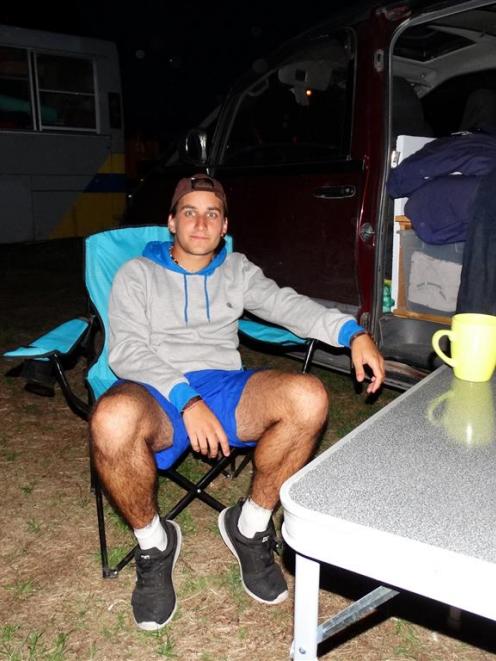 Freedom camper Kevin, of France, settles in on Tuesday night. PHOTO: DAVID WILLIAMS
The owner of an unauthorised camping ground in Queenstown says he is shutting it down.

The move has drawn praise from the local council, which calls the site ‘‘unsightly''.

Over summer, campervan and car occupants have clogged an empty section at the Frankton Rd and Stanley St intersection.

Land owner Eric Zuo, a Christchurch-based Chinese businessman, has confirmed he will fence the site.

‘‘Once I get a quotation I will start to close it up.''

Queenstown Lakes District Council regulatory manager Lee Webster, who supports Mr Zuo's move to clear the site, said trespassers were thumbing their nose at the rules, knowing the council could not use its freedom camping enforcement powers on private land.

‘‘I think it's really unsightly to see that as the vision as you drive in, and see buses and coaches, vans and possibly even abandoned vehicles, tents and such things, just ad hoc-ly on that piece of land.''

When Mountain Scene arrived there at 9pm on Tuesday a young woman was brushing her hair, using a people mover's side window as a mirror. Her friend applied make-up in the rear-view mirror.

They had just arrived at the empty lot, while Frenchman Kevin (24) had been there a week.

When the housekeeper first arrived in Queenstown he stayed at the 12 Mile Delta camping ground. It was $10 per person and there was just a toilet, he said.

He used the public toilets down the street and showered at work. There was a cooker in his car.

Italian Ronny, who was on holiday from Picton, said Queenstown was booked out.

‘‘In a hostel, a sharing room for eight people is about $35 a night. It's a bit expensive, isn't it?'' - Additional reporting David Williams