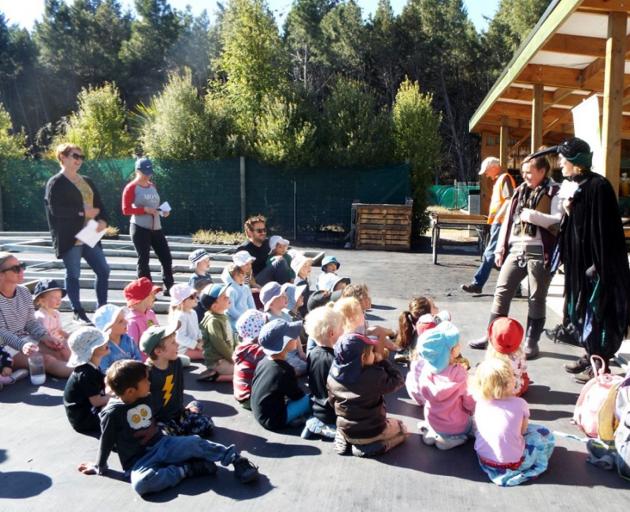 Wakatipu Reforestation Trust members educate preschoolers, in Queenstown, on biodiversity and reforestation. PHOTO: SUPPLIED
Environmental stewardship will take leaps and bounds among the next generation thanks to $28,000 in funding being approved for a Queenstown biodiversity trust, its leader says.

The good news was delivered during the Otago Regional Council’s full-council meeting on Wednesday, when councillors approved 10 applicants for a share of its ECO Fund.

The Wakatipu Reforestation Trust’s Education for Nature project was granted the most — $28,000 — from the second round of funding this year, in which $125,000 was on offer.

"The news has made my day."

It meant the programme could continue to deliver hands-on conservation education to children in schools, preschools and youth groups by offering nursery visits, school planting projects and in-class learning.

Without the funding, the trust only had enough money to see the project through to January 31 next year, she said.

It was a relief to no longer have that date looming.

"It is really exciting — we are over the moon."

The trust, which has planted 50,000 natives in the Wakatipu Basin area and recorded 15,000 volunteer hours since it began in 2015, would now be able to increase weekly hours for its education officer, who had previously been working on "skeleton" hours.

A nursery manager would also be hired to work 15 hours a week.

Ms O'Donahoo said it was critical to build environmental stewardship among the next generation.

The council’s ECO Fund offers a total of $250,000 through two rounds of funding each year, in March and October.

Decision panel chairman and Otago regional councillor Michael Deaker said the October funding round received 30 applications seeking more than $500,000, which was the most of any rounds to date by a significant margin.

"The ECO Fund is of particular value to many groups because it can fund administration costs as well as shovel time, and that’s where some of the most crucial work happens behind the scenes of these projects," he said.

Cr Gretchen Robertson, who was also on the decision panel, said during Wednesday’s meeting she was impressed by the diversity and innovation of the applicants.

But that had made picking the successful applicants "really challenging".

Other high receiving applicants included the University of Otago Department of Geology’s Project Salt, which was approved for $26,000, and the Otokia Creek and Marsh Habitat Trust’s Otokia Creek Marsh Restoration project which received $21,659.