Photo: Getty Images
As New Zealand’s economy falters, Queenstown’s could crater as financial forecaster Infometrics warns the tourism-driven economy could face years of recovery and shrink by $633million by March.

A new Queenstown-Lakes District Council-commissioned report by Infometrics senior economist Nick Brunsdon paints what Queenstown Mayor Jim Boult yesterday called a "bleak picture" if nothing was done to soften the blow of "the greatest economic shock in living memory" as a result of Covid-19.

"Although the full extent of the shock is still to play out, it is clear is that the economy will be irrevocably changed by this pandemic," Mr Brunsdon advised the council.

"Queenstown-Lakes’ GDP [gross domestic product] is forecast to contract by 23.3% ($633million) over the year to March 2021, compared with 8% in the national economy. This is far more severe than previous economic cycles, as Queenstown-Lakes’ economy was relatively unscathed during the Global Financial Crisis," he wrote.

Mr Brunsdon said as tourism returned to Queenstown, in five years — by 2025 — the number of international tourists visiting the resort would likely remain below pre-pandemic levels. Infometrics reported Queenstown-Lakes’ overall unemployment level was forecast to rise from 1.1% in the March 2020 quarter, to 18.5% in March next year. 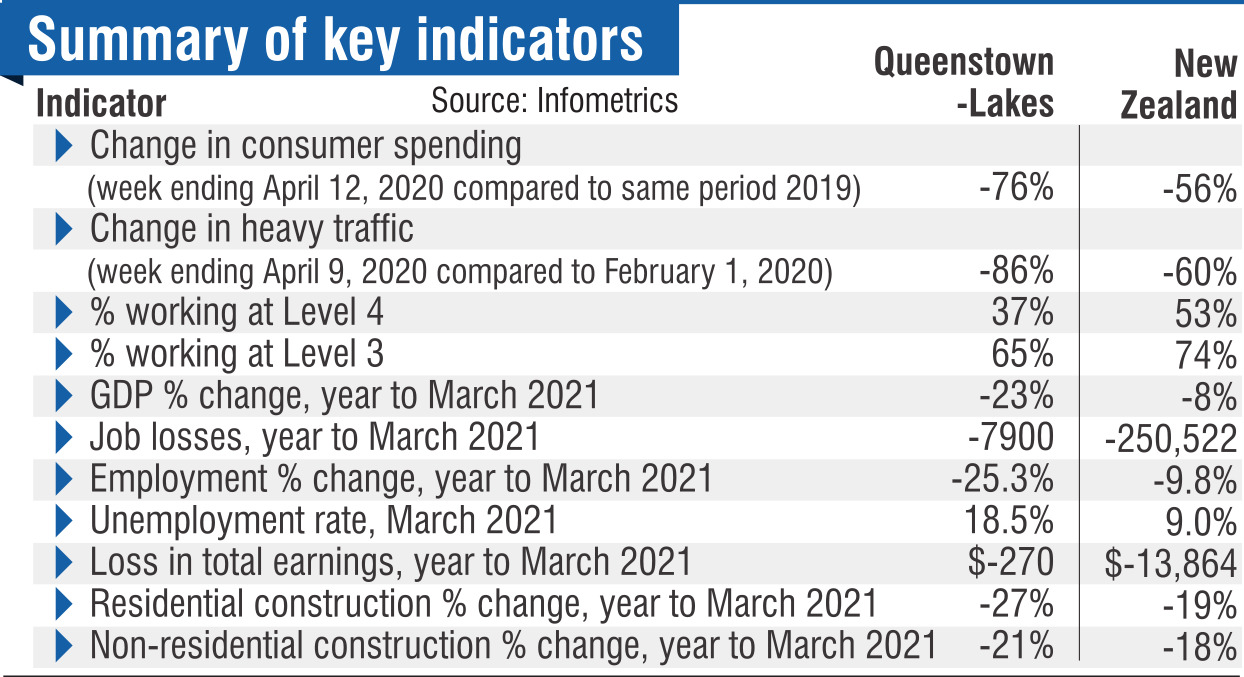 The projected fall in employment of 25.2% places Queenstown-Lakes as the second-hardest hit district in the country, behind the Mackenzie district, and just ahead of Kaikoura and Westland as each of the four districts rely heavily on international tourism.

Queenstown-Lakes would be the fifth-hardest hit area in New Zealand in terms of the total number of jobs lost — behind Auckland, Christchurch, Wellington and Hamilton.

However, the other areas have larger workforces and the impact would be more keenly felt in Queenstown.

Mr Boult yesterday said the report was troubling but noted the district was already making "big steps ... to improve our future".

"Predicting how and when domestic and international tourists come back to the Queenstown Lakes is a tough game, but we are more hopeful than the research on this front. The projections show that the timing of a transtasman bubble, or the extent to which Kiwis travel down here, could make the difference of nearly 1000 jobs."

Yesterday The New Zealand Herald reported the 40-strong bilateral group, the Trans-Tasman Safe Border Group, had a detailed proposal to put to the Government for the safe and sustainable reopening of the border that was now in the final stages of development.

Tourism accounts for 64% of all employment in the Queenstown-Lakes district, and international tourists contributed 63% of all tourist spending, Infometrics said in its report.

Agriculture and food manufacturing made up 3% of Queenstown-Lakes’ employment numbers in 2020, compared to 9% across New Zealand.

The predictions this particular agency produces have been way off the mark in the past. I’d even gamble that they are wrong again this time too.