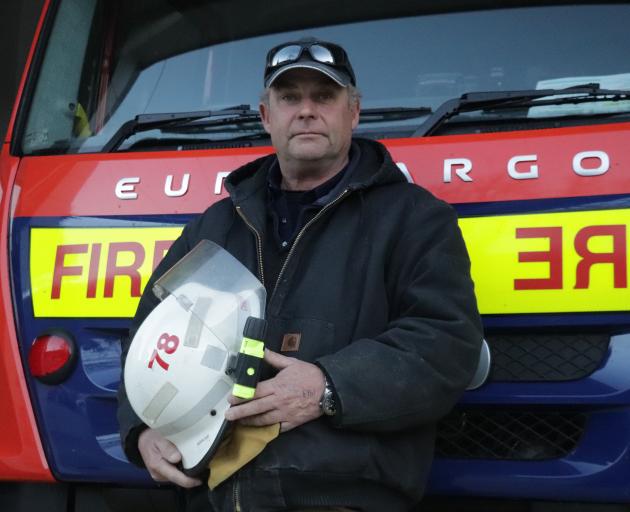 If you have ever heard the fire station siren blaring across Arrowtown, chances are this means Murray Forward is hitting the ground running.

For the past 22 years, the longtime Arrowtown resident has been an integral member of the town’s volunteer fire brigade.

He was made chief five years ago and has no intentions of stepping down any time soon.

As he yarns to the Otago Daily Times in the Hertford St station on a cold Arrowtown afternoon, it is clear Mr Forward chooses not to overcomplicate his secondary vocation.

"It’s about your community, isn’t it?" he said, when asked what drove him to join the brigade more than two decades ago.

Born in Dunedin, Mr Forward arrived in Arrowtown as a 5-year-old and has lived in close proximity to the station ever since.

His parents once owned the former Royal Oak Hotel, now the site of several shops in Buckingham St.

By day he is co-owner of Base Contracting, a construction and earthworks company only a stone’s throw from the fire station.

After all these years in the service it sounds as though he has mastered the art of resisting the urge to lie in bed a few seconds longer when the alarm sounds in the dead of night.

"Sometimes I would say that you think ‘I could lie over’. Nah, can’t! Go!"

"You find most firemen will be like that, very few that won’t, they are a dedicated individual that gets out and gets into it."

"A huge part is not overthinking it ... because if you start overthinking things, it all goes out the window, for [lack of] a better word."

Mr Forward believes that if a volunteer fire brigade is going to work in a place like Arrowtown, the commitment goes well beyond the firefighters themselves.

He credits his wife, Jan-Marie, for her role in his career.

"If your wife isn’t supportive, don’t be here ... she is as much involved in it as you are, as she’s the one that’s getting woken up at 3am in the morning."

He even admits Jan-Marie is usually out of bed before he is.

"She will have the lights on, the curtains pulled, the door unlocked, so I’m heading off in the right direction.

"It’s a team effort. It’s not just the individual; your wife or partner, whichever it be, is 100% behind it as well and they’ve got to be. Otherwise it won’t work."

When someone pictures a firefighter they probably visualise a person in a beige suit holding a hose to a burning building.

But Mr Forward said fighting fires was a very small part of what a volunteer brigade did — in his 22 years in service, he had attended only about 20 well-involved house fires.

Rather, the biggest chunk of their work would be motor vehicle accidents and medical events. Volunteer brigades throughout the country are now trained as first responders.

Naturally, this means Mr Forward has witnessed a fair amount of trauma.

"I think some of the ones that stand out are the waste of life.

"I think we’ve had a few over the years where people have died unnecessarily, mainly because they were not wearing seatbelts ... If they had worn seatbelts, they’d still be here.

"You can’t emphasise enough to people that seatbelts are there for a reason; put the bloody things on."

Despite the horror he may have witnessed, rigorous training means he never once feels like his own life is in any peril.

"I never look at it that way .., the guys and girls I’m with are very professional on how we do it.

"I never for a moment feel that we are putting anybody or anything or anyone of us in any situation we don’t need to be in. I think that’s quite important."