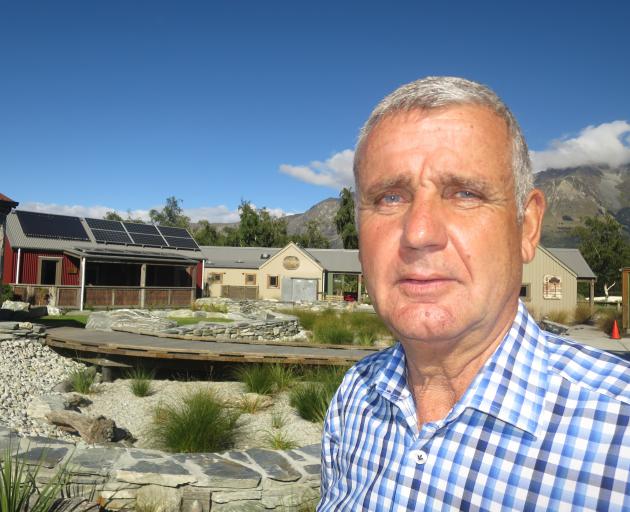 Camp Glenorchy's manager Peter Kerr, originally from Dunedin, is relishing his new role at the head of the lake. Photo: Philip Chandler
Managing Camp Glenorchy, which officially opened on Tuesday, is like coming full circle for Peter Kerr.

The 58-year-old's stellar hotel career had its humble beginnings in Queenstown.

Dunedin-raised, he got to know the resort because his parents had a holiday home in Hallenstein St.

He had plans to go farming after leaving school, but a car accident - not his worst, as it turned out - put paid to that.

After two months in hospital he shifted to Queenstown and to subsidise his skiing, which he had fallen in love with, started working at the Frankton Motor Hotel as a trainee manager.

He then joined the new Ramada Inn, now Copthorne Lakefront, also as a trainee manager, taking his hospitality papers through Dunedin's Otago Polytechnic.

Next came the first of his several overseas moves, becoming resident manager at Sydney's Hilton hotel, before being appointed assistant manager of the opulent, 800-room Mandarin Oriental in Hong Kong.

"You could live in the hotel for three months and never leave," he said.

Mr Kerr worked at hotels across South East Asia and the South Pacific during his globetrotting career, including as group manager for Tanoa Hotel Group in Fiji, helping the owners buy Queenstown's Aspen Hotel.

However, it was in the Maldives and India where he managed some of the most impressive properties, including Ananda in the Himalayas, which was then rated the number one destination spa in the world.

He was also head-hunted to open a spa resort in India for Hilton and made several return trips to New Zealand, for roles at Hyatt and Sheraton in Rotorua and, in the late 1990s, managed Bellamy's in Wellington - Parliament's food and beverage outlets.

On one trip home he met his future wife, Tracy, who is now Camp Glenorchy's guest services manager.

In January 2009, Mr Kerr was involved in a head-on car crash in the Hawke's Bay, which put him in hospital for 10 months.

"That accident was very life-changing. In fact, I'm really lucky to be here talking to you," Mr Kerr said.

"After something like that, and being hospitalised for 10 months, you do appreciate life far more.

"Probably, before the accident, I was a little bit self-opinionated.

"I've been fortunate in that Tracy has been very supportive right the way through."

His right knee also had to be completely rebuilt.

For the first time in New Zealand, police used "black box" evidence to help convict the driver of the other car, by proving he had been travelling at 150kmh two and a-half seconds before the impact.

The accident also made Mr Kerr more determined to give back.

That fitted with his next role, running a luxury lodge in Tanzania, which also had Camp Glenorchy's fully sustainable ethos.

After recent assignments in the Pacific with Tanoa Hotel Group, he found Camp Glenorchy's general manager role on Seek.

"I said to Tracy `this is too good to be true'.

"I'd always wanted to go home and do something, but I didn't want to get into mainstream hotels, which are too much focused on the bottom line and the numbers.

"The first thing in the morning [in those hotels], you look at the daily report.

"I come in and look at who's arriving today, who's departing today."

Mr Kerr, who joined Camp Glenorchy in June, said his philosophy is he has two sets of guests.

"One set is the customers who are staying with us, but the others are my team, so I need to look after them and make sure they're given all the tools, the training and the support they require."

He agreed he was very hands-on - "hand-on", he quipped.

He shares many of United States owners Debbi and Paul Brainerd's beliefs and philosophies and likes they way they are reviving the traditional Kiwi camping experience, where you bump into other guests while cooking your meal, for example.

"I'm just happy to wake each day and look at this amazing place I'm living in and be thankful that I'm here."