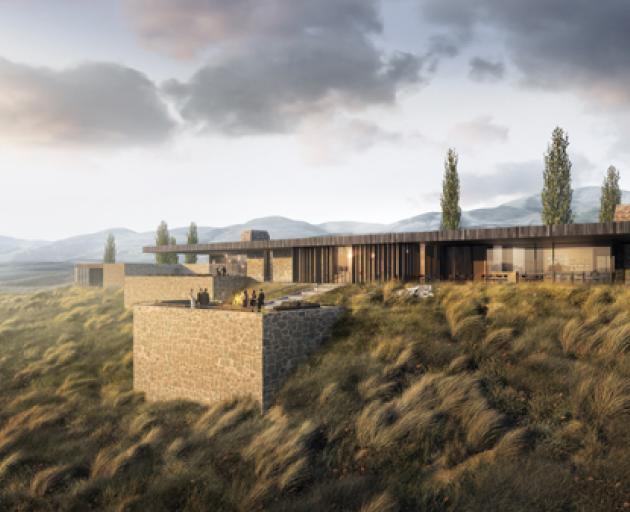 A artist's impression of the rejected golf course clubhouse. Image: Supplied
Commissioners have refused consent for a proposed golf course - which had a price tag of between $9 million and $12 million - near Arrowtown.

Hogans Gully Farming Ltd's bid for land use and subdivision consent to establish an 18-hole championship golf course on a 158.8ha section near Bendemeer was rejected by commissioners Gina Sweetman, Calum Macleod and Lee Beattie.

The proposal, which had a total price tag of about $30million, also included a clubhouse, driving range and 96 residential and visitor accommodation units on the land near The Hills, bounded by McDonnell Rd, State Highway 6 and Hogan's Gully Rd.

In their written decision, released this week, the commissioners found the proposal would result in adverse landscape effects which were "inappropriate in this context".

While landscape architect Paddy Baxter submitted the residential clusters would be recessed, the site would not have a manicured appearance and fairways would be "indistinguishable" when viewed from a distance, the commissioners disagreed.

They said the residential aspect would result in a "substantial change" to the land values and it was "clear" the golf course would not be "indeterminable" when viewed from, for example, the Crown Range.

"The existing golf courses ... had a significant presence in the landscape by the inherent design, that changing the type of grass would not address.

"This, in conjunction with the residential units, would significantly affect the landscape views from the Crown Range."

Ryan Brandeburg, of Golf Tourism, had submitted the course would become an important tourism asset for Queenstown, given the sport was a significant contributor to the local economy.

He expected the Hogan's Farm course would have joined a group of 14 "marquee courses", which also included Millbrook, The Hills and Jacks Point.

Mr Brandeburg said he believed there was not enough supply at present.

When questioned on the issue of financial viability and why The Hills had not yet constructed any of the consented residential accommodation, he said The Hills was a private project.

He questioned the financial viability of The Hills as a stand-alone golf course, noting the reduction in tee times and the $1000 green fee.

He talked about the Kauri Cliffs and Cape Kidnappers courses, which he said were "vanity projects" and needed residential development to back them up.

In his view, there was demand for a new course and that clusters of golf courses in proximity to each other worked well.

While the commissioners noted the positive effects of the proposal, the adverse effects could not be avoided or mitigated to a level "we find would make the impact acceptable".

They also noted the proposal sought to introduce residential development outside the Arrowtown growth management boundary, "which has the potential to undermine the council's approaches to urban growth management in the district".

the government may want to plant pine trees there.. to save the planet