By Guy Williams
0 Comments
Antipodean favourite Crowded House could not put a foot wrong for the 6000 fans who turned up in Queenstown on Saturday for the band’s second Otago show in three days.

The first outdoor gig of its New Zealand tour had a smaller crowd and more laid back atmosphere than the annual summer concert the Gibbston Valley Wines venue is best known for.

On a T-shirt and sunhat day, with only a breeze keeping a lid on the temperature, Neil Finn, sons Liam and Elroy, Nick Seymour and Mitchell Froom started proceedings with Weather With You .

The band’s trademark banter, including Neil Finn’s praise of the valley’s "alpine light" and his repeatedly expressed gratitude for being able to play for a crowd during a global pandemic, suggested they were pleased to be there, too. 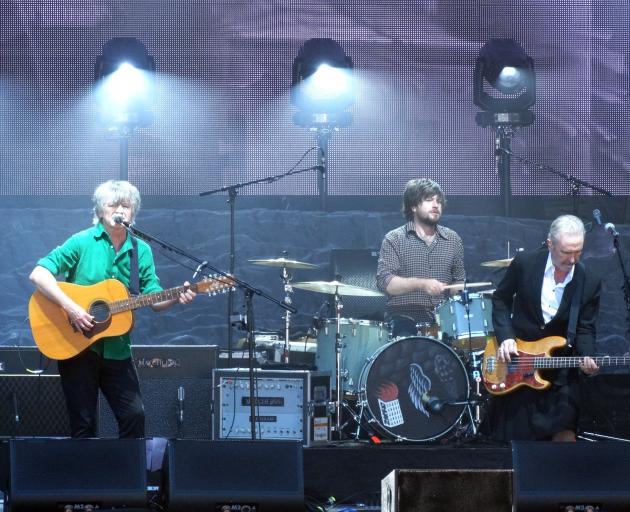 Performing at their concert at Gibbston Valley Winery on Saturday are (from left) Crowded House frontman Neil Finn, drummer Elroy Finn and bass guitarist Nick Seymour. PHOTO: GUY WILLIAMS
He also gave a shout-out to his two sisters in the audience — "it doesn’t happen very often".

The band upped the ante with 45 minutes to go by launching into its biggest hit, the anthemic Don’t Dream It’s Over.

That brought the majority of the crowd to its feet, and that is where they stayed until the end as the band reeled off some of its biggest hits, including Something So Strong, Better Be Home Soon and a rousing cover of David Bowie’s Heroes.

Finn introduced the finale, Split Enz’s I Got You, as a song "from another band I used to be in", which ended with Liam Finn and Seymour playing the closing guitar riffs lying on their backs.