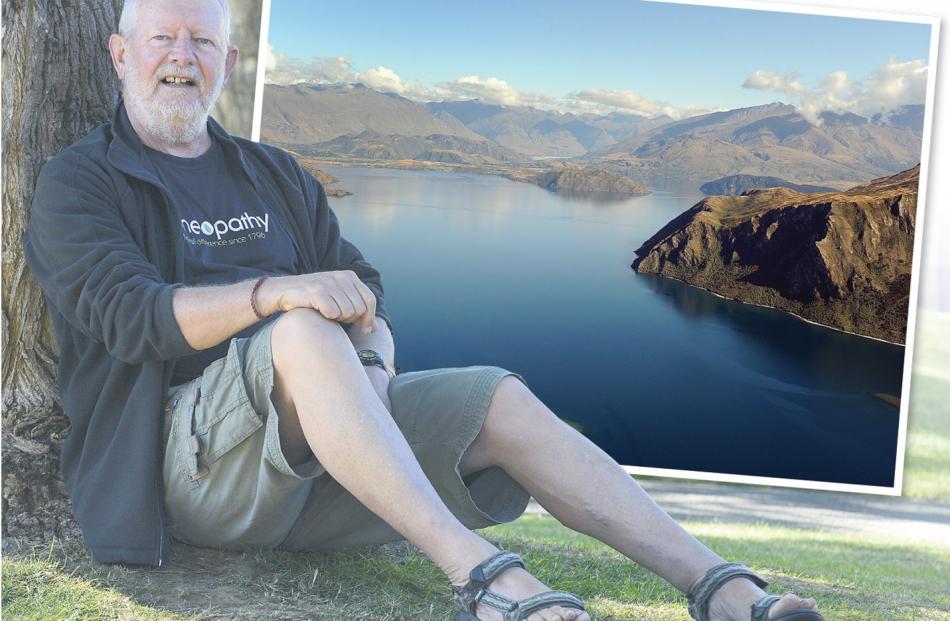 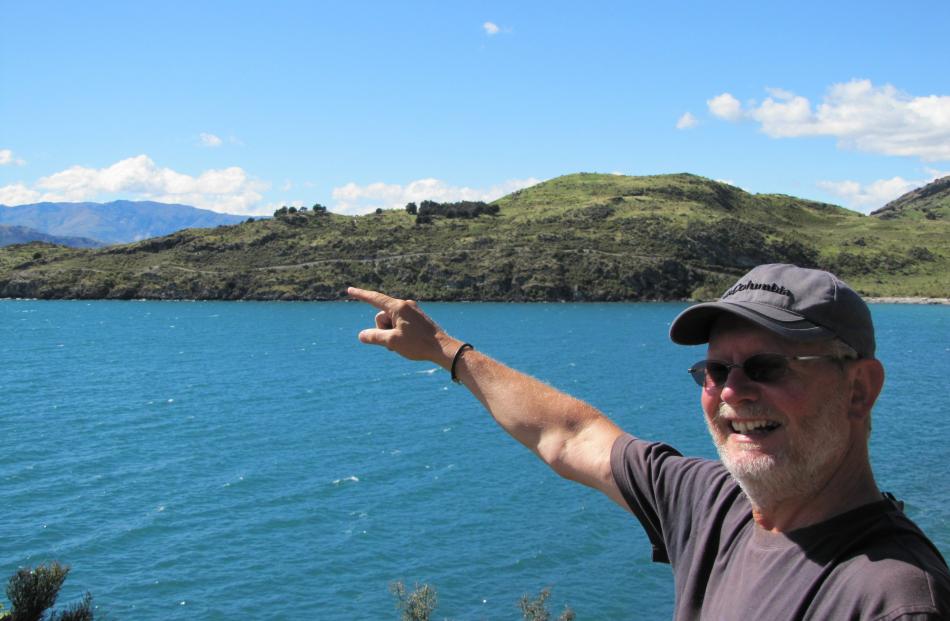 Mr Haworth points to the approximate area where developers Damper Bay Estates Ltd sought to realign the Millennium Track in 2011. The society was successful in having the approved number of building sites reduced from six to one so the track was not... 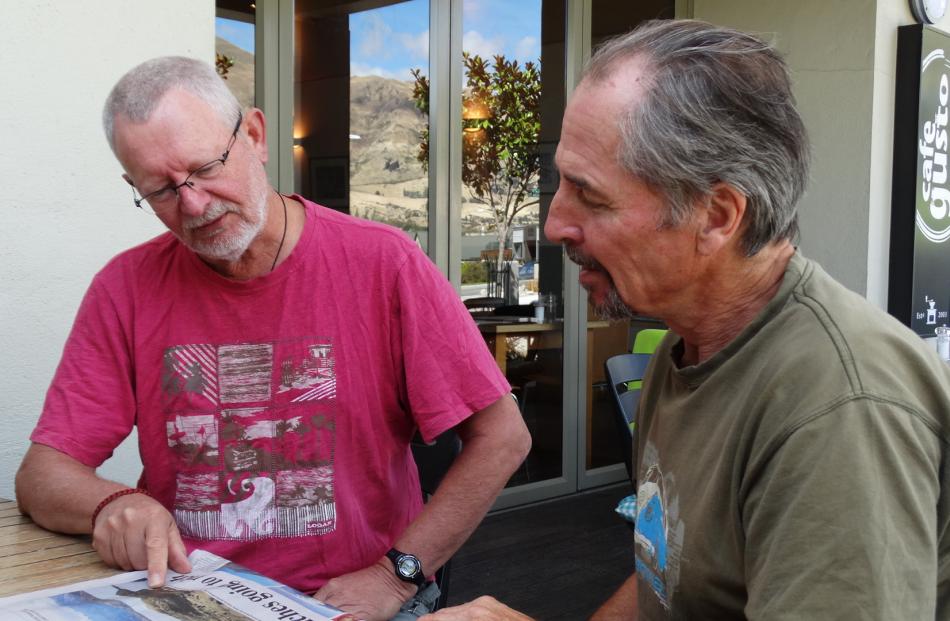 It seems everyone wants a slice of Wanaka’s pristine landscape lately.  Those same unspoilt rural vistas  brought former accountant and founder of the Upper Clutha Environmental Society Julian Haworth (right) to settle in Wanaka 27 years ago. He’s since made it his mission to ensure those scenes are safeguarded from developers and development. Kerrie Waterworth finds out what makes this landscape lover tick.

Julian Haworth describes himself as an ageing backpacker who is "trying to live the dream and run the society at the same time".

We meet at Wanaka’s Cafe Gusto (where he has an account and I suspect is his proxy office) a few days after the inveterate traveller returned from an 11-week trip through Nicaragua.

"I’m getting the mix right. My life is dominated by things I have to do for the society like writing submissions, turning up to hearings and hundreds and hundreds of hours working on the current review of the Queenstown Lakes District Council district plan. Travelling rejuvenates me but in saying that, I wrote three submissions in Nicaragua and was in the newspapers here several times."

Mr Haworth has been travelling for nearly all of his life. Born in Ely, Cambridgeshire, his childhood was spent in one small town after another as his headmaster father was promoted around Britain. After training and working in London as an accountant, Mr Haworth headed overseas when Margaret Thatcher was elected prime minister of Britain in 1979.

"It was one of the triggers, a coincidence probably, but I was delighted to leave when I saw that she had won."

Mr Haworth said he wasn’t entirely sure why both he and his brother moved towards the left of the political spectrum as his parents "weren’t overtly political but they certainly had strong opinions, a strong sense of fairness and always voted Labour." (brother Nigel  is president of the New Zealand Labour Party).

Mr Haworth travelled overland by bus from London to Athens and then flew to Kathmandu.

"There were signs in the cafes saying no smoking of marijuana here but you couldn’t read them for the smoke."

He backpacked down through Southeast Asia and on to Sydney, Australia, where he worked as an accountant for two years until his visa expired.

"I had to go back to Britain so I went via Tibet and hitchhiked from Lhasa to Kathmandu and nobody did that then, we saw nobody and slept under bridges."

"I went around to his flat a few times and heard him speak at rallies and meetings, he was an absolutely  brilliant speaker, and that’s got to be something that pushed me in the direction more towards the Greens more than Labour."

"One of my most vivid memories was being with Jonathon and a few others on a barge and floating down the canals around Maida Vale to Camden Town in London when we were campaigning for the euro elections. It was great, we were yelling through megaphones at all the people telling them to use canal boats instead of motorised transport."

Mr Howarth’s Australian residency visa came through so he headed back down under.

"I had about 13 jobs in Sydney working as an accountant for gold traders and bond traders and all sorts of jobs. I love Australia because if you can show you can do things, you can get just about any old job. It’s a meritocracy, not like Britain."

Two years later, after watching England beat Australia at the Gabba in Brisbane in 1986, (Mr Haworth is a self-confessed cricket addict) he went travelling again, spending all of 1987 travelling through South America where he met his New Zealand-born  future wife, Robyn, in Quito, Ecuador.

After a few more years in Sydney, they married in Waiuku in the North Island and moved to Wanaka where they opened Wanaka Backpackers on April Fool’s Day, 1990.

"When I came to live in this wonderful landscape it was obvious the developers were being given a free hand. It made no sense to me to see these landscapes built all over and I couldn’t just sit back and allow it to happen."

In Queenstown, the (now folded) Wakatipu Environmental Society has been credited with protecting much of the Wakatipu outstanding natural landscape from development. It was started by the former two-term Queenstown Lakes District councillor and Department of Conservation biodiversity assets manager, the late Barry Lawrence. Mr Haworth said Mr Lawrence was his other great inspiration.

"I had many, many conversations with Barry, I went to court with him to fight the district plan and it was during that plan process that I set up the Upper Clutha Environmental Society. I remember him saying to me, whatever you do, Julian, don’t call it an environmental society as you get so much flak. I said I couldn’t see any alternative and if flak was what you got if you put your head above the parapet then so be it."

In 2006, after raising two sons and turning the Wanaka Backpacker into a  successful business, Julian and Robyn sold up, split the proceeds, and went their separate ways with Mr Haworth deciding to devote all his time to the UCES.

"One of the first things we did was put a full-page advert in the local newspaper about two proposed developments, one to subdivide an area on Roys Peninsula and the other just past Waterfall Creek, both of which had been identified as outstanding natural landscapes. The whole to town went mad, there were about 115 submissions and the developers withdrew their applications. It was a defining moment."

Mr Haworth said he was not opposed to subdivisions or growth, just so long as it was not in rural areas.

"There’s enough land zoned for residential development in the urban areas for the next 40 years, so we should stop rural development dead now."

Mr Haworth estimates he has done 15,000 to 20,000 hours of unpaid work for the society since he formed it in 1995. A lack of public support from the Wanaka community has disappointed and frustrated him.

"There are many intelligent people  here who are sympathetic to the UCES but they sit on their hands. I’m talking about people who wouldn’t lose their jobs or be affected in any way by supporting us publicly but because of their position in society they don’t want to be seen to be associated with us, yet they are actually right behind what we do. For instance, last week I got an email from somebody saying they completely supported the society’s stance in opposing two new subdivisions, one on Ballantyne Rd and another near the Cardrona River, ‘but by the way don’t quote me’. That happens all the time."

Mr Haworth plans to keep representing the society until "we’ve sorted out the district plan," which he estimates could be another two years "as it will be fought through the courts".

After that he said someone else can take up the cudgels, "someone who is rich, in their 40s, has ability and plenty of time on their hands."