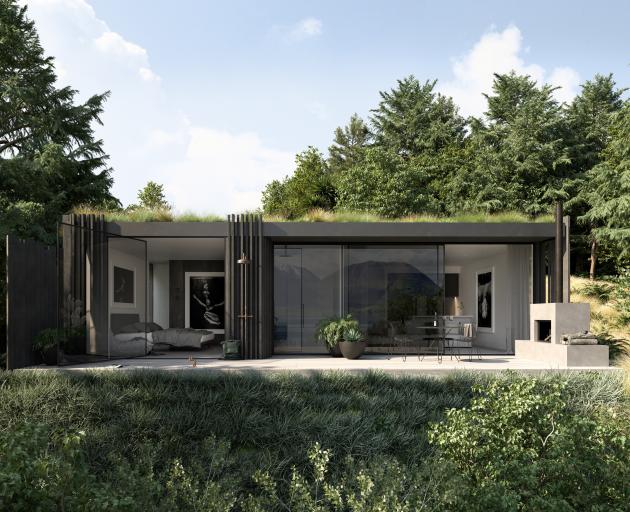 An image of a villa at the proposed Waimarino Luxury Lodge at Bobs Cove, near Queenstown. IMAGE: B PROPERTY GROUP
The developer behind a luxury lodge proposal near Queenstown has decided to publicly notify it after an unfavourable planning report.

He wants to build 24 luxury villas, each on a freehold title, on a 1.8ha site overlooking Bobs Cove, about 15 minutes’ drive from the resort’s town centre.

Mr McIntosh said he and his consultants were surprised by the Queenstown Lakes District Council’s landscape expert’s report, because they had been working closely with the council from the outset.

"They’ve been very constructive, until the last minute."

It means about 50 affected parties can submit on the proposal before the February 8 deadline.

It will then be the subject of a public hearing in a few months’ time.

Although he was lamenting the additional cost and delay, he was confident it would not change the final outcome, and intended to start the two-year build as soon as possible, Mr McIntosh said.

The complex, which would include an owners’ residence, restaurant, micro-distillery and yoga studio, all for residents’ use only, would be one of the most sustainable developments of its type in the country, he said.

The design by Design Base Architects incorporated living roofs, all facilities powered by solar and its own water source.

Although six mature native trees would have to be removed to make the development viable, 7000 more natives would be planted.

"A lot of people perceive the land as all natives, but a lot of it is scrub and non-indigenous species."

The company would also give a native tree to the community for every bed night sold, which it expected would amount to 100,000 natives in the first five years of operation.

He pointed out the site, bought from veteran property developer John Reid, was zoned rural residential.

"There could be four large residential homes with clotheslines, trailers and outhouses, without any sustainable aspects.

"That’s a permitted activity, so we think this is an improvement on baseline.

"We think this is good for the community. We also think it’s good for the environment, but we appreciate not everyone’s going to see it our way."

He had taken deposits on the sale of 11 villas, and was retaining ownership of the remainder.

Mr McIntosh, who is a Sydney resident, lived in the resort from 1995 to 2000, co-owning and operating the Black Sheep Backpackers hostel in Frankton Rd.

He made his start in business by founding a company that merged with others to become the Kiwi Experience tour bus company.

His company is now developing a 35-room boutique hotel in Wanaka, next to the town’s New World supermarket, completion of which is expected by early next year.