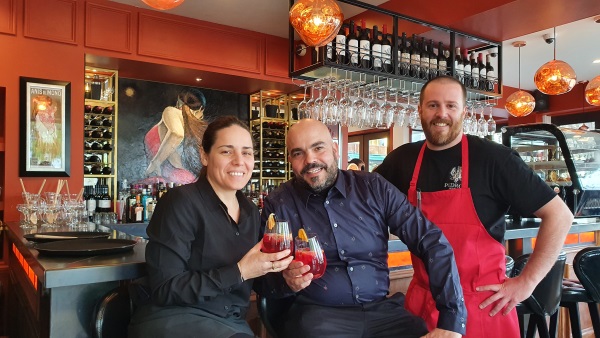 Pedro's By The Lake co-owners Maria De Leon, left, and Damian Brown, centre, toast the opening with head chef Matias Valle. Photo: Mountain Scene
Almost a decade on from the original being destroyed in the Christchurch earthquakes, there’s a Pedro’s restaurant sitting pride of place on Queenstown’s waterfront.

The finishing touches for Pedro’s By The Lake were put together on Monday before a soft launch that night.

Brown says lovers of the old Christchurch restaurant immediately caught on and arrived to try out the food.

‘‘We had 20 or something people who used to live in Christchurch and used to go to the restaurant … they brought the family here and all loved it, the whitebait and garlic prawns.

‘‘We brought a lot of the favourites back that Pedro had and added some news ones.’’

Carazos, who lost both his restaurant and his son in the Christchurch earthquakes, died last year, meaning he never realised an ambition to open a second venue in Queenstown.

The company recovered from the devastating 2011 blow by opening Pedro’s House of Lamb takeaway stores and vans, but until now never had a restaurant to match the original.

When Covid-19 hit and Patagonia Chocolates relinquished its lease on the building underneath Absoloot Hostel, Brown couldn’t resist the opportunity.

‘‘Everyone tells me opening in the middle of a pandemic is not what anyone in business wants, but it’s an opportunity we didn’t want to miss and it feels good to create jobs.

‘‘It’s unfortunate and sad to see just how many applications we had, but at the same time it was beneficial to pick amazing staff with lots of experience.’’

He says 15 jobs have been created so far, but there’s room for more if things go well.