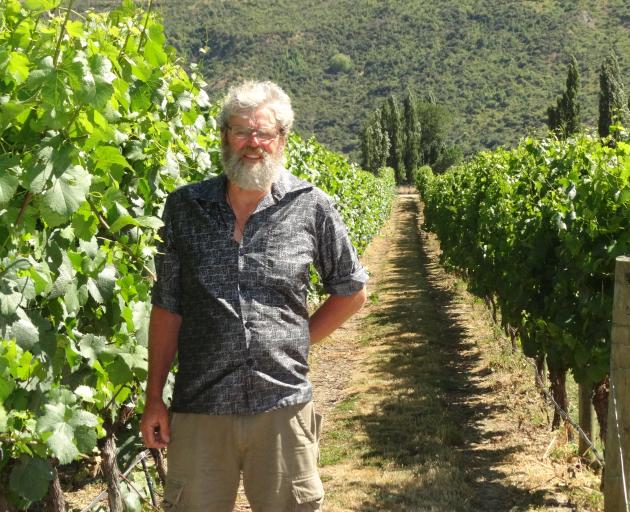 Grant Taylor, of Gibbston’s Valli Vineyard, said it will be the earliest harvest of his 25-years in the industry. Photo: Louise Scott
Gibbston winemakers say they also could be faced with a shortage of seasonal workers after hot weather conditions mean they are ahead of schedule for grape picking.

Grant Taylor, of Gibbston’s Valli Vineyard, has never seen such an early harvest in more than 25 years in the industry.

While perfect conditions will ensure a bumper crop, he worries labour could be an issue.

"It is a real concern that because things are early there won’t be enough pickers in the region. Usually we pick in April but I wouldn’t be surprised if we were picking at the middle of March."

He admitted it would be easier on his 3.6-hectare vineyard — but he feared for bigger players.

"That is the bonus of a smaller vineyard you can pull in family and friends to help out when you need them in the busy season."

Mr Taylor said the vineyard would be able to ripen a bigger crop than usual and said, in terms of growing, it was a great year to be a winemaker. The vines do not usually flower until the new year.

"We were finished over a month ago and we are really early. Physiologically when we look at the plants we know we are a month ahead, which is good in a way because in areas like Gibbston you can run out of summer, [as it] gets too cool."

He and fellow winemakers measure heat to ascertain when grapes will ripen.

This year they are well ahead.

It is the same story in Central Otago, where fruit and grape harvests are early.

Bannockburn viticulturist James Dicey was "petrified" vineyards would not be able to find labour.

They usually relied on seasonal workers arriving after finishing up in Blenheim or Waipara Valley, whose harvests are traditionally earlier.

He was worried the clash would lead to a shortage of manpower.

"We are trying to get people from other areas, we are advertising heavily among backpackers and trying to recruit more Kiwis."

He admitted it was difficult to employ New Zealanders due to the cost of living but said he was working with Ministry of Social Development’s Work and Income to find jobseekers.

"It is going to be all hands to the pump after Christmas to make sure we are getting enough workers here.

"I have no idea where the staff are going to come from. That is an understatement right there. I am petrified."