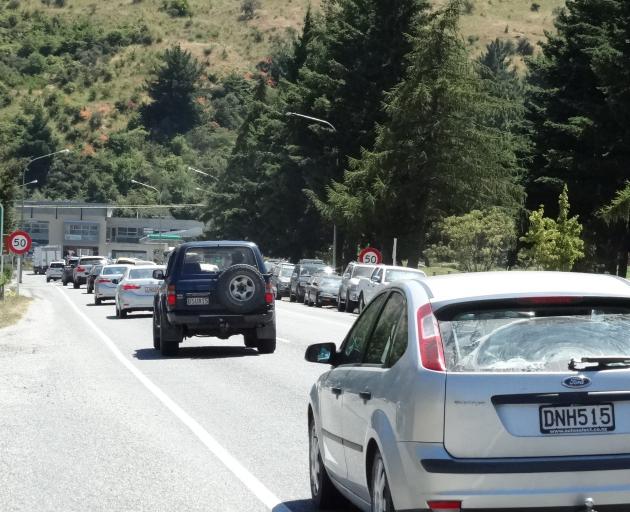 Traffic banked up on Kawarau Road, near Queenstown Airport. Photo: ODT files
Queenstown’s big-ticket bypass project is more grid-locked than the resort’s holiday season traffic – with even a business case a year away.

Frustration over red tape holding up the progress on the $148 million town centre ‘arterial route’ is now starting to boil over. Mayor Jim Boult says it’s becoming "more and more urgent", while lobby group DowntownQT is preparing to take the fight for funding to the Minister of Transport Phil Twyford.

NZ Transport Agency tells Mountain Scene the business case for the project won’t be finished until the end of next year.

"And the jeopardy is that obviously affects the economic bottom line, not just for businesses in town but for everyone who lives in this district."

According to Queenstown’s council, the roads are due for completion in June 2022, June 2023 and June 2024 respectively.

Wilde says the arterial project process extends back four years, and now "it feels like we’re going back to the beginning".

He also calls the process "overtly political", and says DowntownQT, along with Boult, will be lobbying Twyford to sort it out. They’ll also continue to "proactively" engage in NZTA’s process.

Boult believes NZTA will still open its wallet, but just when that’ll happen is the issue.

"It’s not so much an issue getting them to the table, it’s the pace of progress," he says.

"This year we’re going to have another Christmas and New Year where we’ll have traffic jams in the downtown area."

If NZTA doesn’t approve funding, Boult says the council, meaning ratepayers, will have to stump up for the whole thing.

But he doesn’t think that’s likely.

The mayor’s been open about his increasing frustration with NZTA, and the time it’s taking to sort out traffic congestion in the resort.

Speaking at a recent public meeting, he said he was putting pressure on NZTA to work on the congestion, part of which has been attributed to roadworks at the Tucker Beach Road intersection on State Highway 6.

He was "very frustrated" by how long it could take for decisions to be made.

"Take the arterials to go round the downtown area – we’ve been working on that for ages, but getting a commitment is very, very difficult and it’s starting to frustrate me."

He said several ideas had been floated to ease the district’s traffic woes, including a cyclist/pedestrian bridge over the Shotover River and a new roundabout at Lake Hayes Estate.

NZTA regional relationships director Jim Harland says a business case is currently underway, and will "consider in more detail the case for investment in the arterials project together with other key elements of the indicative business case programme".

"This work is due for completion towards the end of 2019 and until then no decision can be made for funding of the implementation phase of this project."