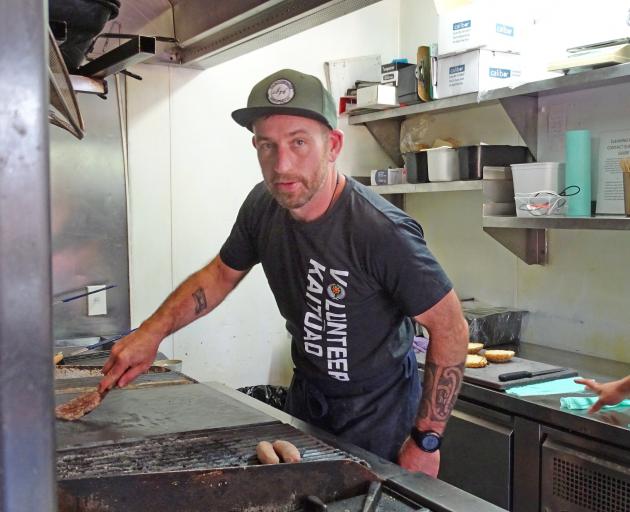 1876 manager Jim McCaffery has been working in the kitchen to help with staffing shortfall. PHOTO: CASS MARRETT
The holiday period brought a big boost for Queenstown hospitality operators, but staffing shortages continue to bite.

One bar manager, Jim McCaffery who runs 1876, has had to work in the kitchen since before New Year’s Day.

It had continued to be busy through this week, more families visiting rather than the younger demographic last week.

When asked how staff were coping he said "they could definitely do with some days off."

But applications for chef jobs were starting to come in.

"We’ve actually got someone trialling at the moment.

"Chefs are leaving jobs because they’re overworked, you know, so [there is a] major shortage of chefs, kitchen hands and even just general bar staff."

"That’s how the businesses are set up, to be able to give lots of people a good time and albeit great that they were here for New Year’s, I suppose that on the other side of this we still don’t know what the whole tourism outlook looks like."

The group would soon be heading back into the "unknown" but had managed to hire "a lot of good new staff".

"If it was anything like last year with not many tourists in town, then we’ll be fine for the number of staff that we’ve got," Mr Impey said.

"To get a visa at the moment, it’s incredibly tough, having to meet all the strict criteria," Mr Amos said.

"A border with Australia — it would be a fantastic start."

That, plus fast-tracking any potential visas that would bring workers into the region, would help.

"That’s working holiday, that’s the low essentials, you know, all those ones that can have people in tomorrow, picking up the slack that’s definitely needed."