Instant interest to be part of hub 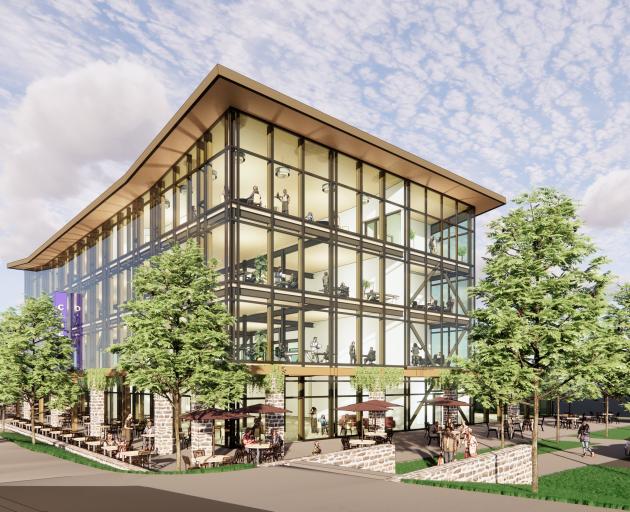 An artist’s impression of the new Queenstown Research and Innovation Hub at Remarkables Park. IMAGE: SUPPLIED
A new $43million research and innovation hub being built in Queenstown is already attracting interest from companies as far away as the United Kingdom.

In Queenstown yesterday, Finance Minister Grant Robertson said a $22.5million loan for the new Queenstown Research and Innovation Hub at Remarkables Park was an important step towards diversification away from tourism.

Mr Robertson was in town to speak to the Otago Southland branch of the Institute of Directors and Queenstown Chamber of Commerce yesterday.

He said the new hub, near Frankton, would draw entrepreneurs and innovators to the region.

The Government has partnered with Remarkables Park Ltd, which will come up with the rest of the cash, to create the 6000sqm building containing offices and meeting rooms.

The group executive chairman Alastair Porter estimated about 100 jobs had been created for the design and construction phase, and expected about 300 to 400 jobs would be created long term.

He confirmed it was part of a longer-term project, which could result in a conference centre being built later.

Mr Porter said the final list of tenants would cover a multitude of disciplines.

He said a result of the pandemic was that people were used to working remotely and places such as Queenstown were appearing very attractive — he even had a London-based company seeking to relocate to the new hub.

Otago-based Mason and Wales were appointed architects and the build would be carried out by Cook Brothers Construction, the earthworks already being under way.

As part of the project a research and innovation advisory board would be formed, chaired by Dr Hermann Hauser, who co-founded Acorn Computers in the late 1970s and is the vice-chairman of the European Innovation Council’s $10billion deep tech fund.

Remarkables Park executive director Johnathan Chen said the new precinct had the opportunity to put Queenstown at the heart of New Zealand’s innovation and technology brand.

Several tenants had already signed up for space and others were in talks, a large number of them coming from industries focused on the environment, including agriculture.