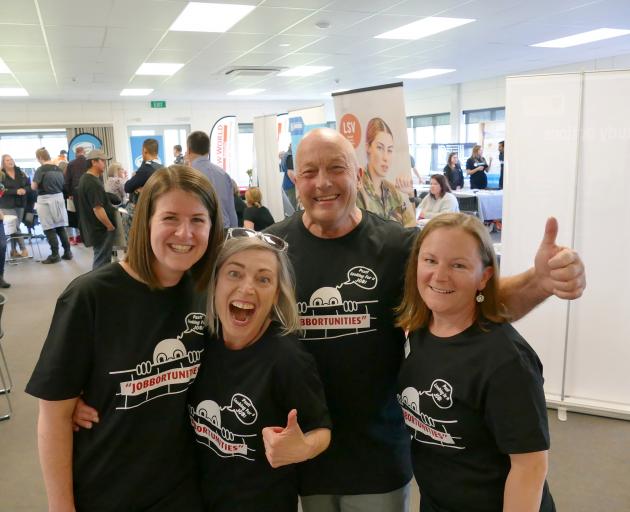 Clutha district Jobbortunities crew (clockwise from left) Justine Barrie, Allyson Cadogan, Clutha Mayor Bryan Cadogan and Ruth Carraway at the Balclutha event. Photo: Richard Davison
The organiser of the Jobbortunities expo in Queenstown on Saturday — where 8000 jobs were on offer to those who had found themselves unemployed due to Covid-19 — says the event was "an absolute tonic for us".

Clutha Mayor Bryan Cadogan took the job fair, likened to speed dating for employers, on the road after scouring Otago for every job vacancy he could find.

By day’s end, Silver Fern Farms, for example, had more than 100 people on the list for potential employment.

The event, which included a special immigration session on Friday, had been a "humbling" one, Mr Cadogan said.

"There are so many beautiful people coming under unacceptable amounts of pressure.

"The confusion that seems to exist for them between the criteria of visa and their ability to stay — it’s quite harsh, I find it really hard."

While not every person at the fair had their expectations met, aligning people with jobs was not an "exact science".

"I think it was the right thing for the right time, but let’s hope we never have to do this again.

"It’s something as a team we’re passionate about, but I would like to think our friends in Queenstown never, ever face a predicament like this one again."

There was a queue of people waiting to enter the Queenstown Memorial Centre on Saturday morning.

Mr Cadogan did not know the exact attendance total, but estimated several hundred people turned up.

Community response programme co-ordinator Ruth Carraway expected Jobbortunities would experience the multiplier effect once people who attended and registered spoke to the friends and others in need of work about what was on offer.

The Jobbortunities crew would follow up with every person who registered to track their progress and would continue working with other agencies, including the Ministry of Social Development (MSD), employers, educators, training providers and support services.

"The beauty of it is we’re all working together, it’s a real collaboration," she said.

"This isn’t about addressing it in silos ... it’s not about us ticking the box, it’s a positive outcome for each individual."

Queenstown Lakes mayor Jim Boult said he was "a little disappointed" in the number of people who attended the job fair in light of MSD reporting about 900 people in the district were on benefits at present.

"I rather hoped we might have seen a fair number of those people coming through.

"But in general terms ... if 50 people ended up with a job [on Saturday] they didn’t have before, then it’s been a success.

"I think while we might have been a little disappointed in numbers, at the end of the day it’s a pretty good outcome."