Landmark Queenstown property up for sale 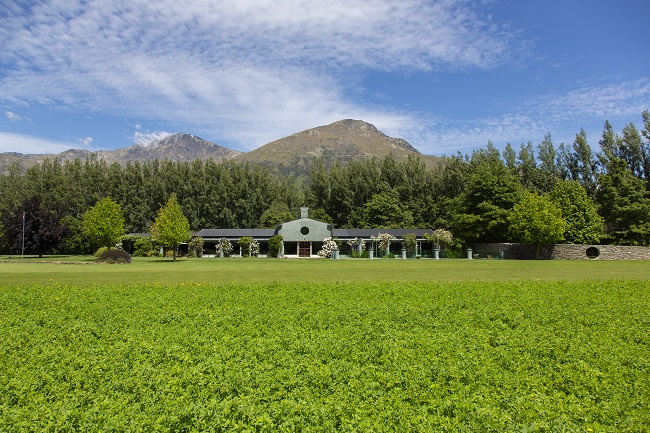 The 14.6-hectare property, bordering 600 metres of the Ladies Mile highway, is for sale by international deadline private treaty. Photo via Mountain Scene
Arguably Queenstown’s most prominent lifestyle property is on the market.

The Walker family’s 14.6-hectare property, bordering 600 metres of the Ladies Mile highway, is for sale by international deadline private treaty.

According to the council’s rating information, the land is valued at $3,600,000 and the improvements – including a five-bedroom, 440 square metre copper-roofed house, 320sqm of vehicle/aircraft garaging and an in-ground swimming pool – at $2.81m, adding up to a capital value of $6.41m.

Jan Walker, whose husband Bill died in a gliding accident in Namibia in 2014, says her family’s planning to move to Cambridge, in the Waikato, where a daughter lives.

According to the sales blurb, the “renowned and admired Queenstown property” presents “significant development opportunity”.

This refers to its location within a proposed fast-tracked special housing area (SHA), which could see 2000-plus medium-low-, medium- or high-density dwellings on 136ha either side of the Ladies Mile highway.

The masterplan was approved by the council in 2017 but is controversial as many people believe Ladies Mile should be retained as Queenstown’s rural gateway.

However, there’s already a precedent – the Queenstown Country Club retirement village, on the other side of Howards Drive from 516 Ladies Mile, is already under construction as an SHA.

Recently, however, mayor Jim Boult said he’d like development put on hold till NZ Transport Agency sorts out traffic congestion in the area.

This property also hit the headlines in 2016 when Delta announced plans to fell 29 trees along its highway border that were growing into powerlines.

A ‘save the trees’ campaign was successful, however.

The sales deadline is February 15, though any earlier offer could be accepted.