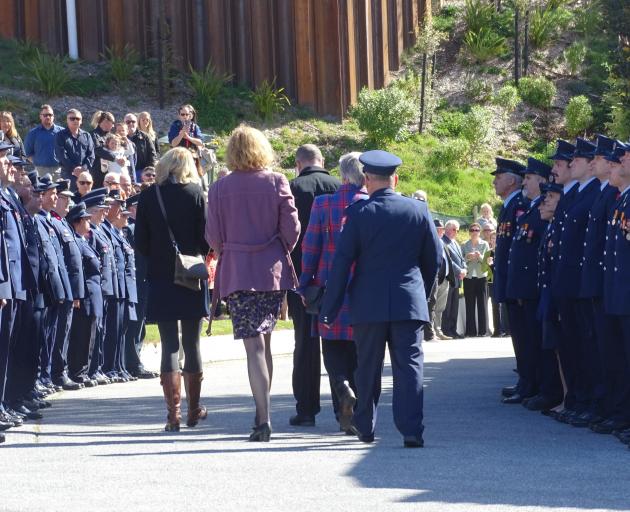 Alison Metherell (left) and her late husband Bill Metherell's sisters, Jessica (centre) and Ros, walk through a guard of honour at the Queenstown Fire Station on Saturday afternoon before a memorial service for Mr Metherell, who died in June. PHOTO: TRACEY ROXBURGH
Bill Metherell once wrote his own epitaph: "A life well lived".

On Saturday, that life was remembered at the Queenstown Fire Station during a memorial service for Mr Metherell (59), a well-known bus driver and volunteer firefighter, who died while snorkelling off Australia's Great Barrier Reef on June 3.

His wife, Alison, and sisters, Ros and Jessica, arrived in a fire engine, just after the siren sounded for him.

The New Zealand flag was lowered to half-mast as the women walked through a guard of honour formed by Mr Metherell's fellow volunteers.

During the service tributes came from his family, friends, colleagues and fellow firefighters.

Mrs Metherell, who got into trouble trying to rescue her husband and spent a week in Bundaberg Hospital, said the pair first met in 1992 when they were both working at the THC Queenstown, she in the restaurant and he as a night porter.

When he left the hotel, the pair lost touch until he pulled up some time later in a ski shuttle bus outside the hotel.

"I remember walking out and saying to him, `What's wrong with your hand?'

Mr Metherell - who had five sisters - was a jack of all trades, but had a special knack for vehicles.

He was a highly regarded coach driver, known for his safety, had trained many NZSki staff and drove buses to and from The Remarkables during ski season for the company.

Friend and colleague Peter Watts said on a bad snow day coming off the mountain, Mr Metherell's bus would be second in the queue, full of staff waiting to go home, while the first bus was empty.

He was 21 when he joined the fire service in the United Kingdom, having dropped out of university, where he was studying aeronautics.

Mr Metherell told his sister Ros he had signed up because he once met a man in a pub who was a fireman and became a "champion snooker player because he had plenty of time to practise while waiting for callouts".

He joined the Queenstown brigade in the 1990s and was involved in fighting many of the biggest blazes in Wakatipu, including Closeburn in 2003 and the World Bar fire in 2013.

Mr Barry said inevitably Mr Metherell would go missing at incidents because he was off doing reconnaissance and planning the next steps.

"As we're here this afternoon and the siren sounded, `Gov' is here for one last callout and, once again, he's nowhere to be seen ... He'll be getting stuck in and you can bet he won't be losing the argument."