Lake Hayes finally has a water monitoring buoy, five years after the lake's protectors first asked for one.

From a permanent mooring in the middle of the lake, a suite of sensors will take water quality and meteorological readings every 15 minutes.

Friends of Lake Hayes Society founding chairman Kerry Dunlop said the group first asked for a buoy in 2014, and had repeated its request since. 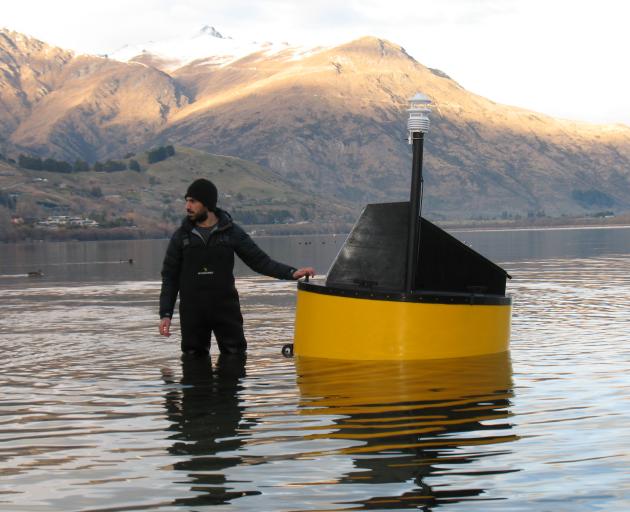 University of Otago PhD student Sami Khan helps launch a water monitoring buoy on Lake Hayes yesterday. Photo: Guy Williams
For more than a decade, the lake had shown symptoms of its high nutrient levels, the result of at least 70 years of aerial top-dressing in its catchment by farmers.

Algal blooms during warmer months had affected the lake's ecological and recreational values.

''What it will mean is that any strategies we adopt to improve the water quality of the lake can be measured far more effectively and efficiently than just the crude collection of water samples.

''We'll get better buy-in from funders, who will know their money is being well-spent, and the public will be more than delighted if we can reverse the trend of increased algal blooms and the lack of fishing.''

Regional council environmental resource scientist Rachel Ozanne said an electric winch enabled the buoy to take readings throughout the water column from the surface down to the lake bed 32 metres below.

The data was transmitted through a 3G cellular network, a ''vast improvement'' on someone having to go on the lake once a month to take readings.

After a period of testing, the data would be made available on the regional council's website.

Identical buoys would be launched on Lakes Wakatipu and Wanaka next year, she said.