By Paul Taylor
0 Comments
A performance by world-class musicians in a string quartet heralded the launch of a new Queenstown charitable trust which aims to nurture young musicians.

Turn Up The Music charitable trust was officially launched at the resort's Hakitekura, formerly Woolshed Bay, on Saturday night.

Kiwi violinists Benjamin Baker and Justine Cormack, viola player Gillian Ansell and expressive American cellist Alexander Hersh had come together as a quartet only five days before the event.

They had played at four Queenstown primary schools on Friday, inspiring the children for whom the trust aims to open up a "world of possibilities" through music.

On Saturday, they performed for about 50 of the Wakatipu basin's well-heeled, philanthropic culture vultures, including the trust's 11 trustees.

The trust will fund the Turn Up The Music music school and create a stock of instruments which can be lent to would-be musicians. 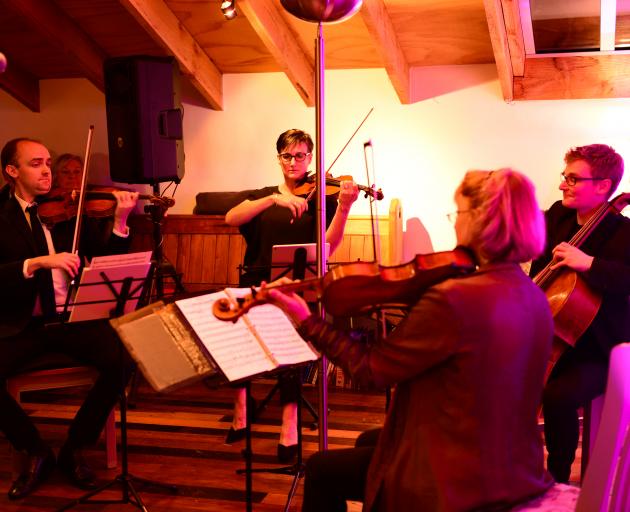 It will also create performance opportunities for youngsters, run outreach programmes in primary schools, and establish a grant fund for primary schools.

"Hakitekura is a place where we were born as a trust. We've had a lot of meetings here, and it feels like this is the setting-off point across the Wakatipu, in terms of what we want to do to help young people," chairman Bill Moran said in a speech on Saturday night.

He acknowledged the trustees, donors, corporate sponsors, supporters, and also Emma Wilson and Wakatipu High School music teacher Alison Price, who laid the foundations of the trust five years before with Lakes Community Music School and are general managers of the new school.

Mrs Wilson used saxophonist Elliot Allemand (16), who performed an impressive recital in the conservatory before the event began, as an example of what can be achieved.

"Elliot was one of our first students," she said.

"He came in as a complete beginner. I remember going into one of his early lessons and asking how many years he'd been playing for, only to be told it was a matter of weeks. I was blown away."

Elliot will be representing New Zealand at the World Performing Arts event in Hollywood.

Mr Moran is also chairman of Sport NZ, High Performance Sport NZ, and Play It Strange, which he co-founded. There are 10 other trustees, including Jill Jardine, who gave the Woolshed Bay property to the University of Otago, to be used as a research retreat. The head of the university's music school programme, Prof Anthony Ritchie, attended.

The concert was also the launch event for Mr Baker's Chamber Music at the World's Edge, which plans to connect international artists with the best in New Zealand.

Mr Baker said it was "phenomenal" to have Mr Hersh in New Zealand and "share in his artistry".