No injuries after car plunges down bank 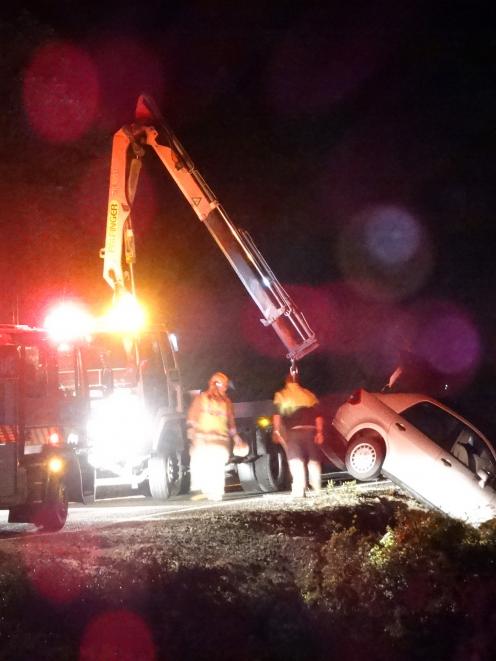 A rental car is pulled from a steep bank on the Devil's Staircase along State Highway 6, south of Queenstown, yesterday.PHOTO: DAVID WILLIAMS
An American couple emerged unscathed after their rental car plunged about 10m down a bank towards Lake Wakatipu last night on a treacherous stretch of state highway south of Queenstown.

The car left Kingston Rd on State Highway 6, in an area known as the Devil's Staircase, in darkness about 6.15pm.

Sergeant Blair Duffy, of Queenstown, said the car crossed the centreline on a wet road and plunged down a bank and lodged in vegetation.

The couple, the male driver aged 52 and a female passenger aged 31, were able to call 111.

"They are [lucky]. It's a fairly treacherous stretch of road,'' Sgt Duffy said.

"We've had vehicles leave the road where the vehicles haven't been discovered or recovered for a period of time.''

The driver was issued a written warning by police at the scene, but would not face charges or be given demerit points.

Fire crews cut the couple from the vehicle. There were no witnesses to the crash.

Traffic was closed in both directions while a towtruck with a crane arm retrieved the crashed car.

The couple, who were on work visas and had worked in Wellington for five years, were on a South Island holiday and had just spent two nights in Queenstown, Sgt Duffy said.

They were travelling to Te Anau when the crash occurred.