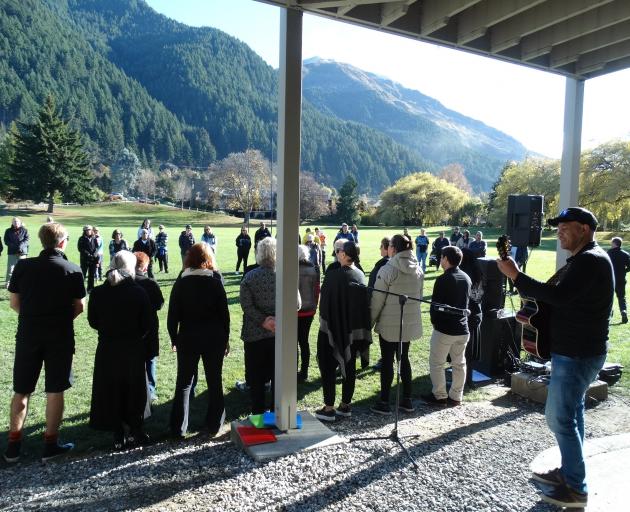 Cory Ratahi (right) plays guitar as his waiata group, Waiatatia, performs at the Queenstown Recreation Ground yesterday.PHOTO: GUY WILLIAMS
A Waiata performance in Queenstown yesterday was an opportunity to reflect on what the community has been through in the past 15 months, its organiser says.

About 50 people attended the kia tau ceremony at the Queenstown Recreation Ground, which was organised by Wakatipu iwi charitable trust Mana Tahuna.

After a karakia, the Waiatatia waiata group, led by Cory Ratahi, performed for an hour.

Trust chairman Darren Rewi told the Otago Daily Times kia tau translated as "to settle", and was usually used in the context of settling the wairua (spirit) of a person a year after they had died.

The purpose of the event was to give the community a "big hug" a year after it emerged from the Covid-19 lockdown.

Through its social work, the trust’s members could see how much distress remained, and how hard other social service providers were working, Mr Rewi said.

The community was exhausted, and still grieving for what had been lost,

"for those all around the world that passed, our lives have changed, and close family and friends have moved away".

The town and its residents had also received a lot of online abuse.

"We feel a lot of aroha for them."