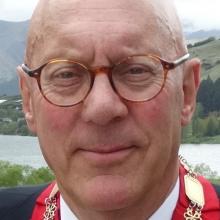 Beleaguered lines company Aurora,  which has been at the centre of a whistleblower scandal in recent months over its poor maintenance programme, identified two poles in Shotover St and Gorge Rd as "condition zero", meaning they could  fall at any time.

Mr Cameron said: "We have now tested the poles using the mechanical inspection method and both poles are assessed as sound and serviceable and the red tags removed."

As previously reported, Mr Boult raised "significant concerns" with Mr Cameron earlier this month, and asked his company to provide the council with a specific roll-out plan for pole replacements in the district.

Mr Boult,  who shared Mr Cameron’s letter with the ODT,  asked Aurora to stabilise or replace condition-zero poles in the Queenstown, Wanaka and Arrowtown central business areas before Christmas. The Queenstown poles were given red tags, signifying Aurora workers should not climb them, as a "precautionary measure", Mr Cameron said.

The poles were inspected last Monday and reclassified.Aurora communications manager Gary Johnson says because the poles were "buried in a tarmac/concrete surface" the condition below ground could not be assessed using the traditional "dig and check method".

Mr Boult insisted four category-zero poles in and around Wanaka also be dealt with.

One in Albert Town campground was scheduled to be replaced on Wednesday while one in the Lake Hawea Holiday Park has been fenced off.

A pole in Wanaka’s Stratford Tce was to be replaced or secured on Wednesday.

But another pole, in Upton St, will be  braced or fenced off during the holiday season because replacing it would require a power outage for central Wanaka.

Mr Boult said Aurora agreed to meet all his requests and he was satisfied with the outcome. The line company  has undertaken to replace so-called condition-zero and condition-one poles across Otago by the end of next year, committing an extra $26 million to the task. There are 678 condition-zero or condition-one poles in the Queenstown Lakes district. In October, Delta employee Richard Healey quit to reveal what he called the "serious neglect" of Aurora’s network.

Last week a Deloitte review vindicated Mr Healey for raising his concerns, and a major shake-up at related sister companies Delta and Aurora is planned, including having separate boards and chief executives.