Inquiries are ongoing as police try to identify the man who died in a crash near Kingston yesterday and notify his next of kin.

A second man remains in a critical condition as a result of the crash between a car and a bus on SH6 at around 7.20am.

No one else involved in the crash sustained any life threatening injuries.

The cause of the crash is still being investigated and police would like to speak to any witnesses.

The crash near Kingston has fanned safety concerns regarding the tourist highway heading into the busy summer season.

It was the second fatal crash involving a car and tourist bus in the area in just over two weeks.

Harpreet Singh was killed when his car and a bus carrying 14 tourists collided near the Devil's Staircase, about 15km north of Kingston, on October 14. 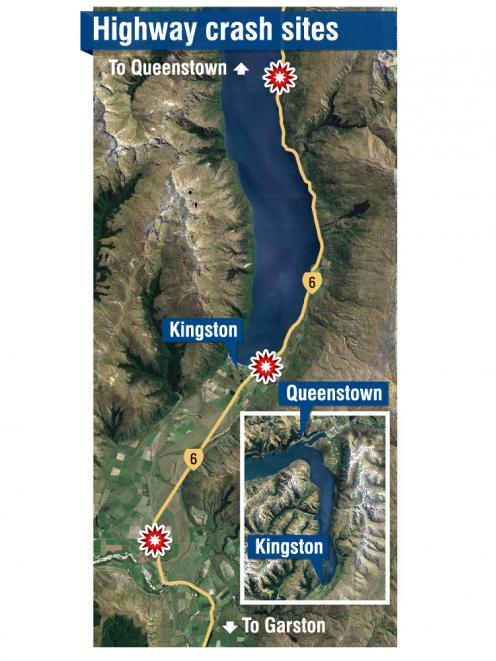 Two days earlier, one person was seriously injured and two people received minor injuries in a head-on collision between two cars near the Devil's Staircase.

There have been almost 200 crashes on the road since 2000, including six fatal and 12 serious collisions.

"The whole district's sympathies go out to the folk in the car, and the people on the bus.

"It must've been horrific for the people on the bus, particularly the driver.

"The wider issue is `do we need road improvements?' and the answer is `we do'.

"But it doesn't matter how safe you make roads, people still make mistakes when they drive."

Graham Roebeck, a former civil construction and roading technician who managed a traffic safety service contract for state highways in the district, said central government funding was urgently needed to cope with an increase in tourists driving with little or no experience of challenging roads such as New Zealand's, as well as planned residential growth in Kingston.

"Straight stretches of road do give excellent visibility. If you're not aware of those dips, perhaps there should be warning of them coming up, but the road markings do alert you to that."

NZ Transport Agency senior safety engineer Roy Johnston said it would consider proposed solutions, but did not believe urgent improvements to the Devil's Staircase were needed because of recent investment in safety barriers and rumble strips. 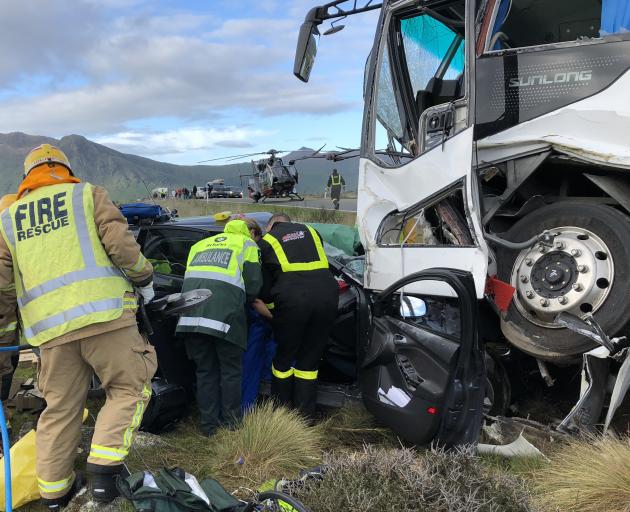 Emergency services staff work at the scene of a fatal collision near Kingston yesterday. PHOTO: SUPPLIED
He declined to speculate on the cause, but said people needed to drive to the conditions on what was a "busy tourist highway".

The car was heading north when it and the southbound bus collided about 7.20am, he said.

The bus ended up off the road, beside the southbound lane, near the brow of a small hill.

The passenger in the car was killed, while the driver was flown to Dunedin Hospital in a critical condition.

The Otago Daily Times understands the driver of the car was passing a truck when the collision occurred.

St John sent two helicopters, four ambulances and one car to the scene.

The patients who had moderate or minor injuries were taken to the Queenstown Lakes District Hospital.

The crash was the first call to service on the first day of a new air ambulance arrangement under which a dedicated rescue helicopter is based in Queenstown.

Helicopters Otago managing director Graeme Gale said the first helicopter, with two intensive-care paramedics and another paramedic on board, was in the air within three to four minutes of getting the call, and was at the crash scene within 15 minutes.

"We've never had that capability in Queenstown before."

The crash caused significant delays for motorists for much of the day, the road not fully reopening until about 3.40pm.