Proud to have seen policing change, grow over career 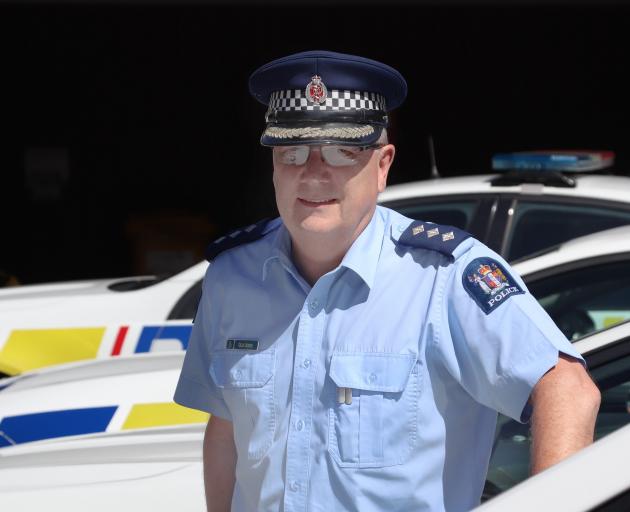 Former Otago Lakes-Central area commander Inspector Olaf Jensen only had four weeks’ training when he was thrust into the front line with New Zealand Police in 1981.

Olaf Jensen has spent two-thirds of his life in a blue uniform. It was officially hung up yesterday after 39 years’ service with New Zealand Police.

From Stewart Island, Inspector Jensen joined the police force in 1981, following in the footsteps of his older brother, Gavin, who at one time was also charged with patrolling the streets of Queenstown.

Just four weeks into Insp Jensen’s training, he and his Wing 80 recruits were sent to Wellington’s Molesworth St to police 2000 anti-Springbok tour protesters outside Parliament.

"They called us ‘Green Group’ because we were greenhorns."

Insp Jensen was later posted to Southland, starting out as a constable, where he met his wife while doing a hotel compliance check "at a venue known by locals back then as the ‘grab-a-granny’ bar."

He had an early taste of search and rescue (SAR) in 1983 when he was part of a small team doing a midwinter crossing of the Routeburn Track which got caught in an avalanche.

The Department of Conservation went on to name that spot "Policeman’s Folly".

He worked his way up the ranks, becoming a senior sergeant based in Winton in the early 2000s, and went on to lead major SAR operations, including responding to the loss of the fishing boat Easy Rider after it capsized off the northern tip of Steward Island, in Foveaux Strait, in March 2012, killing eight of the nine people aboard.

Insp Jensen was also involved in the rescue of Czech tramper Pavlina Pizova in August 2016, who had spent 24 days trapped in a remote hut on the Routeburn Track after her partner, Ondrej Petr, died.

He was later promoted to inspector through his role as Southland’s area prevention manager, enabling him to establish enduring links with Maori Wardens, Women’s Refuge and other partners.

That role — and a shift to prevention-first policing rather than being "the ambulance at the bottom of the cliff" — was something he was particularly proud of.

"We’re actually preventing harm, as opposed to waiting for it to occur.

"That’s been a really positive move and something I was really involved with in Invercargill ... when I reflect back it’s probably one of the bigger shifts in how we’ve policed in New Zealand."

In 2014, he was asked to temporarily take on the area commander job in the Otago Lakes-Central area, which turned into a six-year stint.

He had initially intended to retire earlier this year, but agreed to stay on during Covid-19.

Insp Jensen said it had been "quite a surreal feeling" over the past few months, but on his final day in the uniform he said he was "feeling good" about the next phase of his life.

"Policing has been really good to me and my family. I’ve enjoyed every moment of it.

"There have obviously been challenges along the way, but I’m leaving very happy.

"Queenstown is a great place. When you look out of the window, you have to pinch yourself as far as the location goes.

"But we have our challenges: the issues that go with so many licensed premises, organised crime through drugs, and our roads - which remain our biggest risk and demand."

He was "cutting ties" with the South and moving with his wife of 36 years to Hawke’s Bay in a couple of months to "do something new".

"It’s the time to do it while age might still be on our side a wee bit.

"The first couple of months will be just relaxing and trying to just get back into a lifestyle without having to put a blue shirt on in the morning.

"My wife and I have lived a commuting relationship over the past six years, so it’s time for us to get back and know one another."