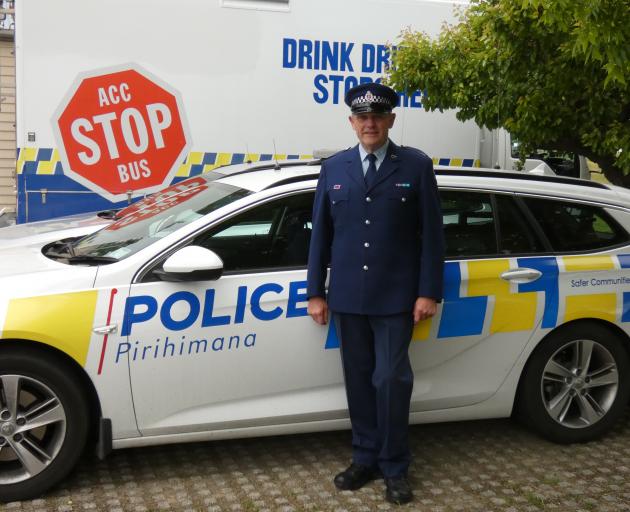 He can go to a crash scene and in his mind visualise what happened. It is that ability, combined with a knowledge of mathematics and physics, that made him a trailblazer in the field of serious crash investigation - and he is largely self-taught.

The former British bobby grew up in the north of England and in 1974 joined the police in Morecambe, a coastal town in Lancashire, England, on the Irish Sea.

"I was a beat bobby. We didn’t have cars, radios were quite new and Lancashire was trialling them."

In his first year on the beat he would be an arresting officer in the Birmingham pub bombings on November 21, 1974, when bombs exploded in two public houses in Birmingham, England, killing 21 people and injuring 182 others.

He and other officers intercepted the bombers as they boarded the Heysham Ferry to Belfast.

After meeting his wife, Judith, Snr Const Crosland took a short break, moved to New Zealand and joined what was then the Ministry of Transport (MoT) as a traffic officer, in August 1977.

He was posted to Meremere in an area of the north Waikato that was renowned as one of the worst road black spots in the country, he said.

"The road toll was very high and communication was one aspect, people didn’t have cellphones, they didn’t exist, so there were issues in getting [crash] information and getting people to the scene."

Emergency services were not equipped with the same "kit’ and did not have things such as the "jaws of life". Cars back then were not fitted with the now-standard safety features.

"My whole business was dealing with crashes on what was the main road between Auckland and Hamilton."

That piqued his interest and after attending countless traffic collisions, he started studying for what later became a career in forensic crash investigation — he was one of the first in New Zealand to use mathematics and physics to understand the marks on a road around a crash scene and to present such evidence in court.

"I started to think there’s got to be way to prove what a driver said was wrong. We’d find a car that had completely jumped a small stream whose driver would say he was doing 50[kmh]."

In 1986, armed with data, he led the first New Zealand prosecution using such scientific evidence.

The crash was in Raglan and there were heavy braking skidmarks on the road.

"We knew he had been braking and from that we could work [out] his speed."

Indications were he had been travelling at double the 50kmh speed limit, Snr Constable Crosland said.

"Then, I actually had to prove it," Snr Const Crosland said.

From then, his reputation in crash investigation was cemented.

"Because I had been doing that for some and had some success they looked at me as a guru."

His career with the MoT and then police took him to postings around the country from Waikato to Tauranga, to South Auckland. He transferred to the Alexandra based Serious Crash Unit in January 2007.

The small Alexandra-based team had one of the largest areas in the country and was on call to investigate crashes throughout Otago and Southland.

His expertise had also led to him being called to investigate crashes throughout New Zealand, including a murder outside a bar in Rotorua in which the victim was run down by a car, Snr Const Crosland said.

"I had to work [out] if it was deliberate or accidental."

Forensic crash investigation was a technical field that used physics, mathematics, surveying, vehicle dynamics and road design to analyse and model collisions, ultimately using scientific evidence to work out what happened and why, to learn from that and to try to prevent similar crashes.

Visualisation and being able to picture in his mind how a crash unfolded was something always backed up by the laws of physics, he said.

Studying part-time, Snr Const Crosland completed a science degree in forensic road collision investigation from De Montfort University — being one of only two in the world to hold it (both are in New Zealand), and is an active member of the international Institute of Traffic Accident Investigators.

The technology used in crash investigation had changed over time — simple measuring tape and chalk being replaced by surveying theodolites, and now drones were increasingly used to map crash scenes.

As computing power had increased, so had the power of software. This was backed up with understanding of how cars and trucks physically interacted with real roads, and by physical testing. Analysing the arrays of sensors built into modern vehicles was also used, he said.

Retired or not, he planned to keep up with developments in the field and still had files to work through for court and other investigations.

"I don’t know what I will do next but it will be related.