The route and stops of a proposed Queenstown passenger ferry service.
Queenstown jet-boat operator KJet has been given consent to operate a commuter ferry service on the Kawarau River and Lake Wakatipu’s Frankton Arm.

However, the company says it could take five years to get up and running.

Following three days of public hearings in March and April, independent commissioners Jan Caunter and David Mead have given the company permission to operate a timetabled service between the town centre and a proposed river jetty near Bridesdale Farm.

Kawarau Jet Holdings Ltd, which as KJet operates adventure jet-boat trips on the lake and the Kawarau and Shotover Rivers, will be able to operate up to six 9.5-metre jet-boats, each able to seat 42 passengers.

KJet owner Shaun Kelly said it had been working on the proposal for about three years, and he was ‘‘very, very pleased’’ by the outcome.

It first needed consent from the Otago Regional Council for work to the channels and riverbed beneath the Kawarau Falls Bridge, formerly a dam, to allow the larger jet-boats to safely pass beneath it.

Because the company would not begin the design and build process for the first boats until that work was completed, it would take most of the consent’s five-year lapse period before it could begin operating.

Mr Kelly said it was aimed at residents of Lake Hayes Estate, Shotover Country and Bridesdale Farm, who despite the impact of Covid-19 on visitor numbers, were already back to driving at ‘‘snail’s pace’’ into town in the morning.

Pricing would depend on the subsidy available from the district and regional councils and the NZ Transport Agency, but it would have to be affordable. 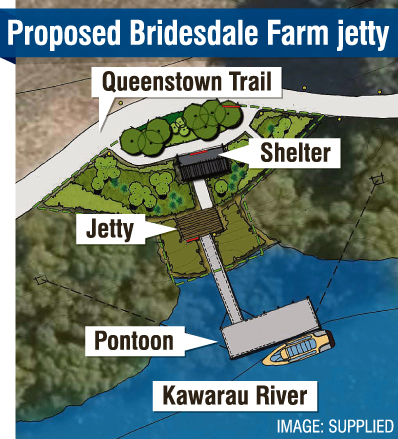 A jetty and shelter proposed for the Kawarau River near Bridesdale Farm. GRAPHICS: ODT

A jetty and shelter would be built next to the Queenstown Trail near Bridesdale Farm, about 200m from the end of Hayes Creek Rd.

Trips would run in each direction every 16 minutes during peak times, and half-hourly or hourly at other times.

There would be stops at Kelvin Heights, Frankton Marina, the jetty near Boyes Cres in Frankton, the Hilton Hotel, and when built, a jetty near Remarkables Park.

A one-way trip from Bridesdale to Queenstown Bay making all stops would take about 50 minutes, but an early morning ‘‘express’’ service would be timetabled.

Mr Kelly said there was potential for extending the service beyond Queenstown Bay to Jack’s Point and Hanley’s Farm.