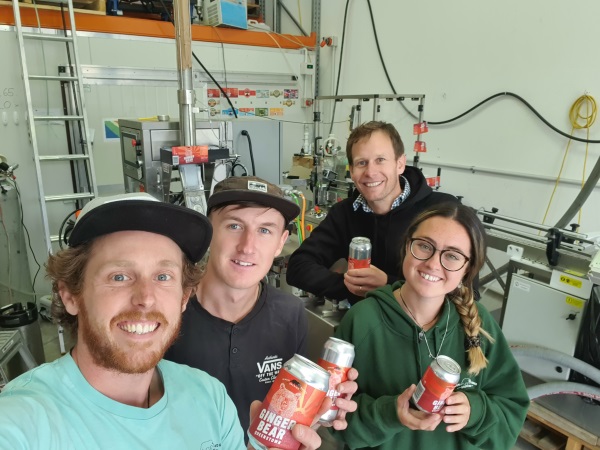 Canadian-born local Wesley McAllister’s launching Loose Moose Canning Co, a subsidiary of his beer and wine company Crimson Badger Brewing, which is based in Glenda Drive.

McAllister says cans reduce waste for breweries and do away with the devastating effects of plastic ring packs on Kiwi wildlife.

The service reduces the chance of oxidisation by plugging straight into breweries’ beer lines.

‘‘We go to a brewery, unload the labeller, canning lines, cans themselves and a compressor, then attach to their tank and we’re ready to go to package all their beer on site.’’

At the moment, breweries must transport their beer to be packaged, and that comes with risks, as well an increased carbon footprint, he says.

The stacking of cans as opposed to bottles further reduces emissions, by increasing the volume of beer on each distribution truck by almost double.

‘‘Cans were not popular, but that’s changed now, they’re easier to recycle and seem to have become the new norm.

‘‘When you get unique craft beer where they’re only going to do a couple of batches — or even just one — that’s when you get the really cool labels and you’ll see the array of awesome labels now in liquor stores.’’

McAllister employs two part-timers and says he’ll operate throughout Otago and Southland, and even up to parts of Canterbury.

Loose Moose Canning Co will also provide eco-friendly six-pack rings for breweries to package their beer as it comes off the canning line, saving time.

‘‘They’re made of organic material that can be safely consumed by animals, and is biodegradable in water or air,’’ McAllister says.

He and his team are still fine-tuning the system, but he aims to launch officially in mid-February.