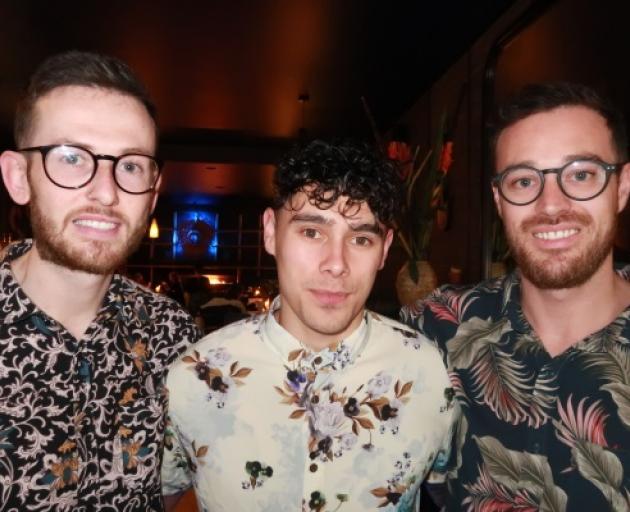 Blue Kanu staff, from left, Ryan D'Henin, Angus Sydney and Warren Ratana. Photo: Supplied
Restaurant staff and a holidaying nurse are being praised for stepping up to the plate to revive a heart attack victim in Queenstown this week.

An Aucklander in her mid-50s had been dining at Blue Kanu with her husband when she suffered a cardiac arrest early on Monday night.

While food and beverage manager Warren Ratana called emergency services, his 2IC, Ryan D’Henin, put the victim on the floor, in the recovery position, and cleared her airways.

As he and a guest checked her pulse, D’Henin says she’d be breathing one moment, then not the next.

They’d been booked 45 minutes later but were seeing if there was a spare table sooner.

Quickly sizing up the situation, she says the victim wasn’t breathing when she got to her.

As she started CPR, she asked staff if they had a defibrillator.

Ratana instructed a waiter, Angus Sydney, to hot-foot it to nearby Life Pharmacy Wilkinsons.

McKenzie: "My husband was standing at the door and he just said, ‘one of those young kids sprinted for his life, literally’."

Sydney managed to borrow a defibrillator from the pharmacy, and went back to the restaurant with a pharmacist in tow.

McKenzie, helped by another waiter, Natassja Kerr, deployed the defibrillator, which successfully shocked the victim back to life.

She says she’d spent "a good five minutes-plus" trying to revive the diner, "which is a relatively long time".

"I honestly did think we’d lost her.

"But she came round and she knew her name, she knew where she was, and all those things, so it was pretty incredible, really."

She was then taken away by ambulance staff, and is recovering, it’s understood, in Dunedin Hospital.

McKenzie, who modestly says others could have done what she did, says "the guys in the restaurant were incredible, they did all the right things".

Ratana adds: "I’m just proud of all the team, really.

"Obviously we’re all over the moon she’s going to be ok."

Restaurant owner Karen Hattaway, who arrived just as the diner was being taken away, says she couldn’t thank McKenzie enough, and happily shouted her a meal.

"One human being saving another one — I just said to her, ‘wow, so grateful’.

"My guys were quite emotional afterwards, and I sat them down and gave them a beer and said, ‘well done’.

"They kept their cool, they were very professional and just did exactly what they were told.

"They were doing stuff that, you know, would make most people cringe — it takes courage to do that and not to shun responsibility."

Hattaway says she and a business neighbour plan to buy a defibrillator to share between their premises.

"I think it’s something we perhaps all should be looking at."