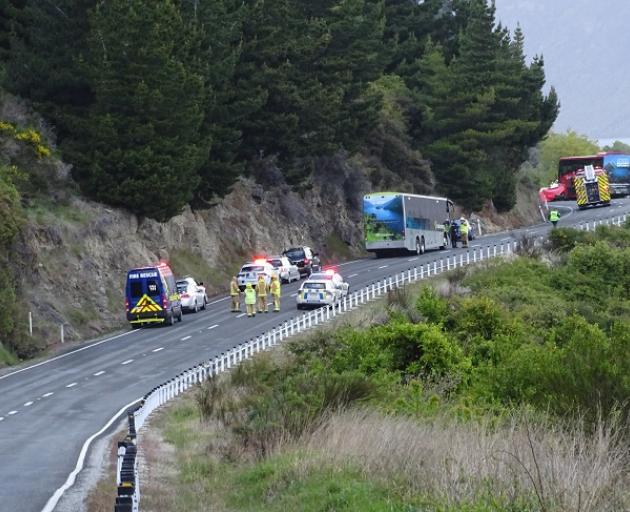 The scene of a recent crash near the Devil's Staircase, SH6. Photo: File

About a third of rumble strips installed as part of a $600,000 project on the road to Kingston have been removed after less than six months.

The NZ Transport Agency is citing concerns from cyclists as the reason for the removal of the strips, which were installed as part of a major safety project.

It comes just weeks after several serious crashes, including two fatals, on the stretch of State Highway 6.

“It puts us right out in the middle of the road,” he says.

With some motorists having a “f*** you, you shouldn’t be on the roads” view of cyclists, that’s not exactly safe, he says.

He believes rumble strips in the centre of the road are important, but unnecessary on the side.

“If you drive off the side of the road you kind of deserve to have a crash.”

NZTA tells Scene strips have been scrapped from a 6km stretch of the road, about a third of the 17.4km initially installed.

System manager Graeme Hall says NZTA worked with local cycling groups to look at specific sites where they felt that rumble strips were a concern for cyclists.

Concerns raised by locals in recent weeks following a spate of serious crashes were met with reassurance from NZTA that safety work had been done on the road earlier in the year.

Hall says while some of the rumble strips have been removed, 1,670 metres of road safety barriers and 103 warning signs were also installed on SH6.

“Lane markings may also be adjusted and passing opportunities will be considered and assessed for inclusion during the next National Land Transport planning process.”

Mr McLister certainly comes across as very arrogant. Does he really think only motorists drive off the side of roads thereby deserving whatever befalls them?
Just maybe cyclists with his attitude are a big part of the problem.

Cyclists aren't permitted to travel on motorways, similarly, they shouldn't be permitted to travel on state highways. Why is the NZTA pandering to selfish, arrogant, dangerous cycling road hogs who don't contribute a cent to the maintenance of roads? However, as cyclists seem to take priority over the motor vehicle owners who DO pay for road maintenance and safety, one wonders whether the dangerous concrete obstructions installed on Dunedin roads will be removed when they complain after one of their own has a serious accident going head over heels into the path of traffic.