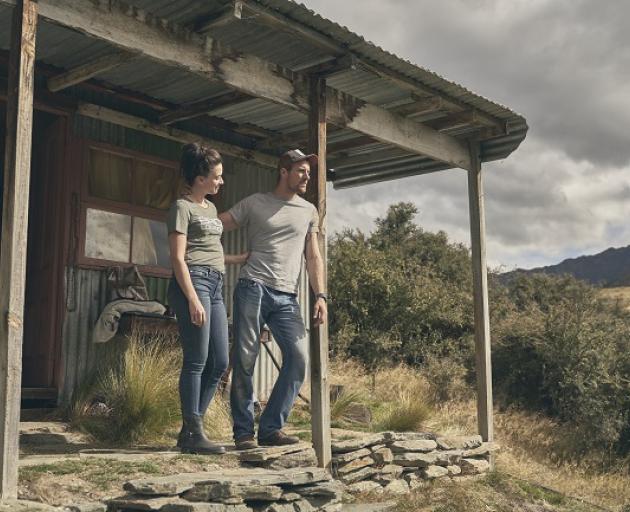 Libby Munroe and Joel Jackson played lead roles in Hunted,which was shot on Queenstown Hill. Photo: Supplied
A freak snow storm and last-minute location changes felt like the beginning of the end in Benn Jae’s journey to shoot an award-winning short film.

In 2016, the Queenstown resident thought up the storyline for The Hunted while chatting on the phone to industry pal Libby Munroe, who went on to help write and star in the film.

Now Jae’s won the top gong for best director at Around International Film Festival in Paris.

The 20-minute long psychological thriller shines a light on how a lack of noise on domestic violence leaves victims to carry an all-consuming burden alone.

It has racked up accolades at film festivals in Berlin, Amsterdam, Barcelona and the United States.

“Libby and I were amazed by the statistics on domestic violence,” Jae tells Mountain Scene

“When we started researching plot lines, domestic violence stuck with us because no one is talking about it, despite everyone talking about women’s rights.”

In November 2017, the crew was due to start filming at Meg Hut, near Cardrona, but an unexpected blizzard and other location problems didn’t make for smooth shooting, and they were left without a site.

“It was gutting because the film was written based on that location.”

Proving success doesn’t come easily or to those who give up, Jae feels the turn of events was the “universe delivering”, after subsequently stumbling across an “even better location” at a dishevelled hunting hut on Queenstown Hill.

“It looks like the iconic Kiwi hunting bach, it’s romantic in a way, but terrifying when night falls.”

The crew slogged through a gruelling schedule to wrap up shooting in just two days, followed by a two-month production period.

The Hunted premiered at a private screening for family and friends at Arrowtown’s Dorothy Browns Cinema last November.

Jae is awaiting the outcome of some more film festivals after making finalist categories for best short film and best director.