Snow returns to skifields with bang, in a flash 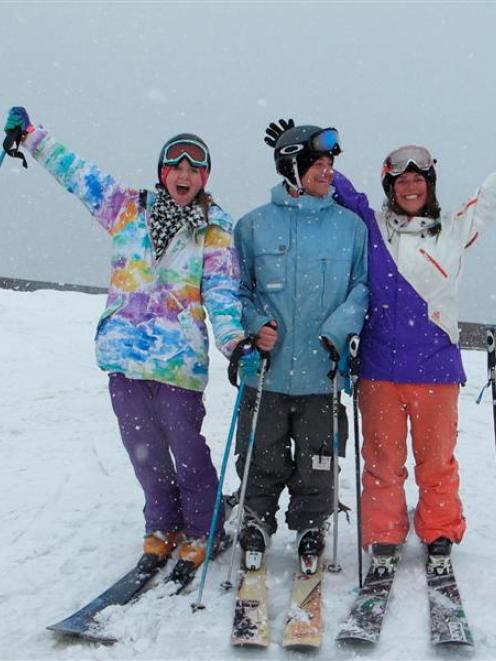 Three happy skiers welcome snow at the Treble Cone skifield on Saturday. From left are Kirsty Paulin (Clyde), Blake Lepper (Auckland) and Nat Segal (Melbourne, Australia). Photo supplied.
Forked lightning and booming claps of thunder at the weekend woke many Wanaka residents and disrupted skifields, shutting one and stopping lifts at another.

The silver lining was snow which could keep the district's skifields going until the end of the season.

Wanaka residents reported windows rattling and houses vibrating early on Saturday, with some of the loudest thunder heard.

Meadowstone resident Graeme Kennerley said he was "just aghast at it all".

"We had shafts of lightning that went all the way from the sky down to the ground and there were multiple forks."

Aspiring Avalanche Dog handler Matt Gunn was staying at the Snow Farm on the Pisa Range when the main storm roared through about 3am on Saturday.The snowstorm came "howling out of the norwest" and then the thunderous crescendo hit about 7am.

"It just kept on rolling and rolling. It was incredible. It was like there was a [Boeing] 747 just coming past us," he said.

Treble Cone Skifield operations supervisor Ross Whitelaw was driving up the mountain during the thunderstorm about 5.30am on Saturday.

"It was pretty intense, actually.

"I was blinded a couple of times driving up into the rain."

One of the Treble Cone lifts was out of commission for the morning and Mr Whitelaw suspected the problem was a lightning strike because several electrical components failed at the same time, which was unusual.

Lightning continued to disrupt the skifield during Saturday because the lifts cannot be operated during a thunderstorm.

The Snow Park did not open on Saturday because of the storms.

Both Treble Cone and Cardrona Ski Resort reported a 50cm fall of snow on the upper reaches in a 48-hour period while Snow Park and Snow Farm on the Pisa Range reported 30cm of snow for the weekend.

Both Queenstown skifields received a welcome reprise of winter as a dividend of the wild weather in Wakatipu since Thursday night.

Coronet Peak received 18cm of snow on Saturday night and bolstered that with snowmaking.

The average snow base was 45cm by lunchtime yesterday.

The Remarkables gained 20cm to 30cm of wind-affected snow on Saturday night, to an average base of 70cm by yesterday.