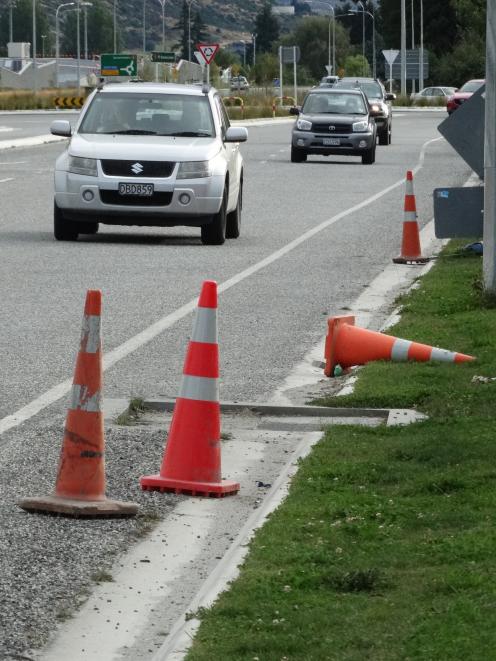 But behind that is a spat with Chorus, the country's largest telecommunications infrastructure company, over the road's realignment.

Queenstown resident Mike Harris raised the issue, saying the manhole - along State Highway 6 at Frankton, opposite Shotover Garden Centre - was surrounded by up to a dozen cones, which were frequently knocked over by cars.

``I have seen not only several instances of near accidents, but also Chorus trucks working on cables in that concrete vault.

``If it were not a traffic hazard, why would the cones remain there for at least 13 months?

``Someone must take responsibility before there is an accident.''

In an emailed statement, the NZ Transport Agency expressed its concern.

Senior project manager Phil Dowsett said it was pressing Chorus to ``complete the cover urgently to the standard required for state highways''.

But it turns out the NZTA is not blameless.

Chorus said it became aware just before Christmas 2015 that the agency had changed its plans for realigning the state highway.

Media and PR manager Nathan Beaumont said the change meant its manhole ended up ``partly in the cycle lane, partly in the traffic lane and at a significantly different level to the new road''.

A temporary ``insert'' was placed above the existing lids and the chamber was sealed, while discussions continued.

``Unfortunately there seems to have been some miscommunication between both parties and little progress has been made,'' Mr Beaumont said.

``I would like to apologise on behalf of Chorus for the time it has taken to get this sorted.''

Opus International Consultants were designing a strengthened roadway lid structure, which should have been finalised by Friday.

``We will then complete the work as quickly as possible,'' Mr Beaumont said.