Sorry to burst your balloon: landing no drama after all 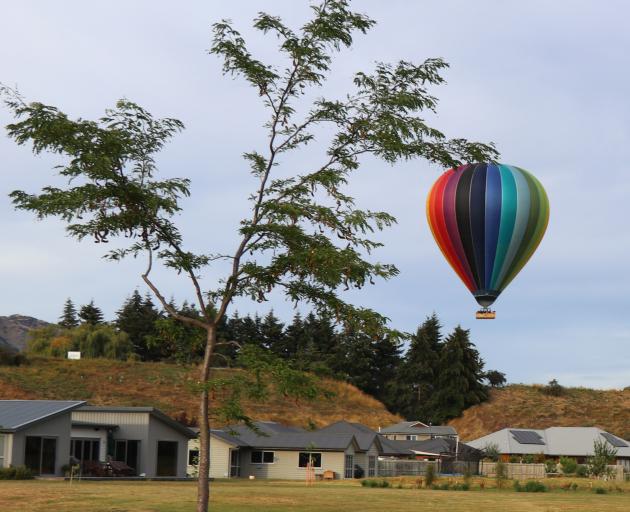 The Sunrise Balloon balloon about to land. PHOTO: PAUL TAYLOR
They stood in their dressing gowns and looked to the skies.

In a scene reminiscent of 1996 sci-fi film Independence Day, scores of residents in Queenstown's Lake Hayes Estate wandered out of their homes early yesterday morning to watch what appeared to be an unfolding drama above them.

One of Sunrise Balloons' rainbow hot air balloons was low over the suburb, heading towards Queenstown International Airport's flight path.

Cellphones were trained on the balloon, schoolchildren waiting for buses gawped.

The balloon eventually dotted down in a field near Queenstown Country Club, just past the houses, in what was a ... "perfectly normal landing'', Sunrise Balloons owner and chief pilot Hugh McLellan said.

"Normal flight, normal landing, no drama at all - we can land anywhere in the Wakatipu basin.

"There is some steering with the wind, not always the way you want to go, but you just make the most of it.

"We find a safe landing spot and land there.''

Mr McLellan said the company had been flying balloons over the Wakatipu for 20 years, and most residents were used to seeing the balloons on various courses.

He said it took a "reasonable amount'' of skill to land in some places. His son Carrick was piloting the balloon.

"We do all our flying in the Queenstown controlled zone. We're talking to the tower all the time, we've got transponders and radios, we're in contact and they can see us on radar, so there's no problem there.

"We work in with them with jet traffic and other aerial activity. We land at the school sometimes and have even landed at the airport as well - we are an aircraft, after all.''