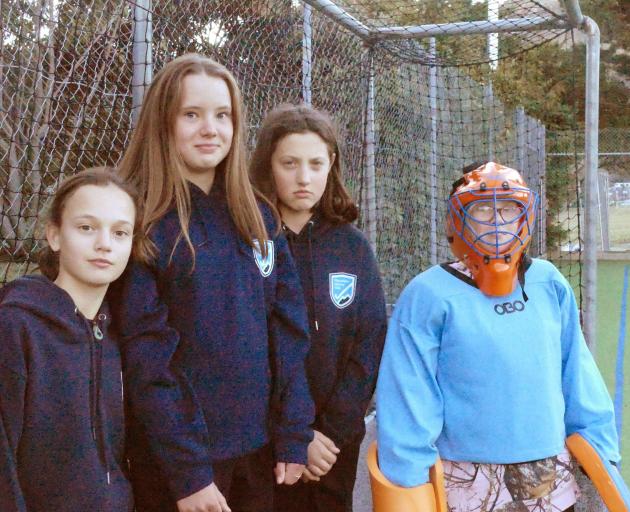 Wakatipu Hockey Club members (from left) Briar Dennison (12), Madeline McNay (12), Chelsea Wood (12), and Elliot Kay (11) turned up for training yesterday to find the club’s equipment gone. PHOTO: DAISY HUDSON
Thieves have made off with $5000 worth of hockey equipment, leaving Queenstown youngsters without the means to practise properly.

"It’s been locked to the fence for the last four years and now it’s disappeared."

The last time it was seen was after the men’s practice on Thursday at the Frankton tennis courts, by Remarkables Primary School, and was discovered missing on Sunday afternoon.

"I suspect the tool box is what people were after.

"It’s a huge disappointment. We had talked about insuring it, but the cost of insuring something like that by a club like us is not justifiable."

The club usually played its matches in Cromwell, but was set

to move to a brand new artificial pitch at Queenstown Events

"Hopefully, we will have a storage shed that’s lockable [at the new pitch], but we’re expecting even more membership growth and we’re having to start again.

"We don’t really care if the box comes back but we’d quite like the contents," Mrs Battrick said.

Police confirmed that they were investigating, but Mrs Battrick said the club would be happy if the training equipment was handed in to the events centre, no questions asked.