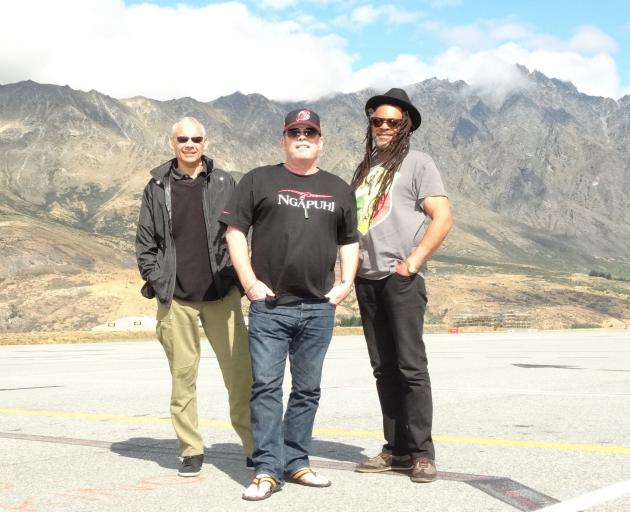 UB40 members soak up the Queenstown sun the day before their washed-out January concert this year. From left are Mickey Virtue, Ali Campbell and Terrence "Astro'' Wilson. PHOTO: LOUISE SCOTT
British  band UB40 is heading back to Gibbston, hopefully this time with some fine, fine weather.

Promoter Jackie Sanders announced on Saturday the band's Red Red Wine Vineyard tour for the coming summer, including a concert at Waitiri Creek Winery, in Gibbston, on January 5.

Heavy rain in January this year washed out the reggae band's outdoor concert at Waitiri Creek, disappointing more than 3000 ticket-holders.

At the time, Ms Sanders, of Jacman Entertainment, said she would "demand'' UB40 come back, and she has come through.

"It was quite difficult. We did start the process straight away and we didn't actually think we could do it until the summer of 2018 but we've managed to add on a couple of dates.

"That meant it was worthwhile them coming all the way down from the UK.''

The other Red Red Wine concerts are being held at Martinborough's Luna Estate on January 2 and Villa Maria Estate, in Blenheim on January 7.

Ms Sanders said the deluge in Gibbston on January 15, which led to the cancellation of this year's concert, was about 20% of the monthly rainfall in three hours, so it was hard to plan for that.

But contingency planning included bringing a larger stage from the North Island, which took less time to erect and would cope better with wet weather.

"We're not taking any chances.''

Capacity for Waitiri Creek is 3500 people and Ms Sanders was confident it would sell out.

Waitiri Creek co-owner Alistair Ward said the fact UB40 wanted to come back to Queenstown was a great accolade for the area.

"We're very excited about it.''

UB40 had four worldwide No 1 singles and over 70 million in sales, with hits like Red Red Wine and I Got You Babe.