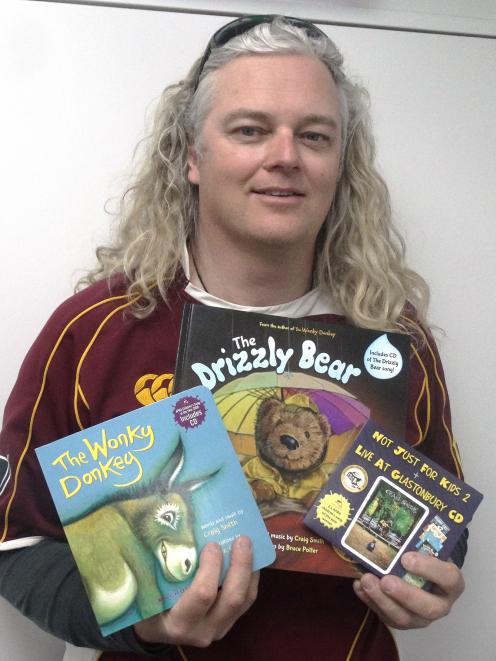 Kiwi author Craig Smith with his popular children's book, The Wonky Donkey, and his new book, The Drizzly Bear. PHOTO: JOSHUA WALTON
A Queenstown author had to hire helpers after sales of his children's book sky-rocketed thanks to a viral video of a Scottish grandmother breaking down in hysterics while reading it to her grandson.

Craig Smith released his picture book, The Wonky Donkey, based on his song of the same name, in 2009.

A recent video showing Janice Clark reading the story to her 4-month-old grandson Archer has been viewed millions of times, causing sales figures to rise rapidly and his publisher to make plans to print tens of thousands more copies.

Smith said it had been a "huge boost" for him financially and he had sold 2500 books in the past three days alone.

"The moment I saw it I was laughing.

"I can't tell you enough how thankful I am to the family.

"It's great marketing and I have sent a T-shirt for Archer and copies of my books to them.

"I'm going to have to think about how to thank them."

The popular picture book, illustrated by Katz Cowley, features a three-legged donkey, descriptions of which accumulate every few pages.

She stopped between chuckles at one point and said: "This is going to kill me."

Amazon UK and US both ran out of copies because of increased demand as a result of the video, which Smith said had been viewed 60 million times.

He even had to hire a team of people to answer the about 5000 emails he had been inundated with since the video was posted on the internet.

The book had already sold more than one million copies but had struggled to capture the global market before the video of Ms Clark went viral.

Smith said he had "always been curious" about how to gain more international attention for his award-winning book.