The boat in action on the Clutha River a couple of years ago, soon after it had been built. PHOTO: SUPPLIED
After more than two years of waiting it is finally racing time for a Queenstown jet-boating duo.

Regan Williamson and Blair Christmas are in the United States to compete in the world jet-boat marathon championships, which start over the weekend.

The duo have had to be patient.

The pair built their revolutionary jet-boat for the championships in 2020. In March of that year — 26 months ago — after some testing on rivers in the South, they packed up the boat in Dunedin and put it in a container, shipping it stateside.

It was some boat too. Not just your run-of-the-mill production line effort.

It can reach speeds of 250kmh with its 2500hp engine and chews through 5.5 litres of aviation gas every minute.

All up, it took more than 1000 man hours to build. Someone said they were stupid to try it but they did, Williamson said. He declined to say how much it cost to build it. 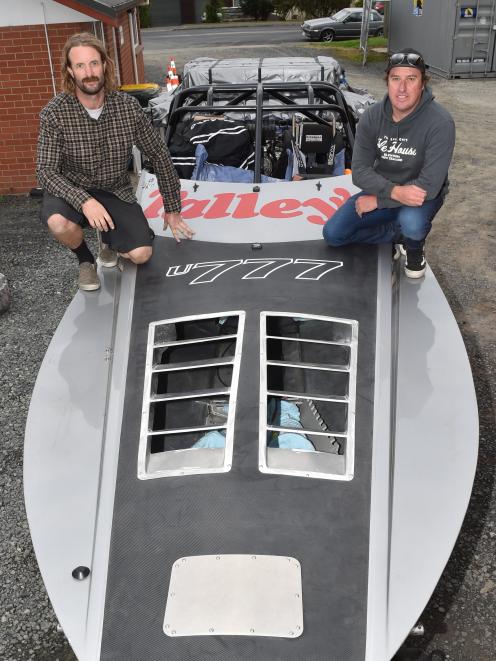 Regan Williamson (right) and Blair Christmas on their boat in Dunedin in March 2020. PHOTO: GREGOR RICHARDSON
The plan two years ago was to ship the boat over to the United States and then in May head over by plane for the world championships.

But we all know what happened between those two months, two years ago.

Covid-19 arrived all over the world, the championships were canned and the boat was in the United States and the men were not. Williamson and Christmas just had to wait — and wait they did.

The boat was shipped to Alberta, in Canada, where it was stored in a friend’s garage. There was a glimmer of hope the championships would happen last year but a Covid-19 wave saw the end of that.

This year though, it is all on. The pandemic is still around but the championships are all set to start in the United States this weekend.

On the line will be Williamson and Christmas, along with their mighty boat, Talley’s 777.

The men travelled to Canada to get the boat at the start of this month. They have been testing it in rivers in the United States over the past couple of weeks. Plans to test on lakes in Canada did not work out as many of the lakes were frozen.

Williamson said this week they had been getting used to driving the boat again. The boat had got up to 241kmh this week so ‘‘we have as good a chance as anyone’’, he said

The championships will take place over eight days in rivers in Oregon, California and Idaho. Williamson, an engineer and Christmas, a helicopter mechanic, are not lacking for motivation. Is has been a long wait.

Williamson finished third at the world championships in the US in 2016 and second in New Zealand the following year.