Request to farmers as rivers dwindle 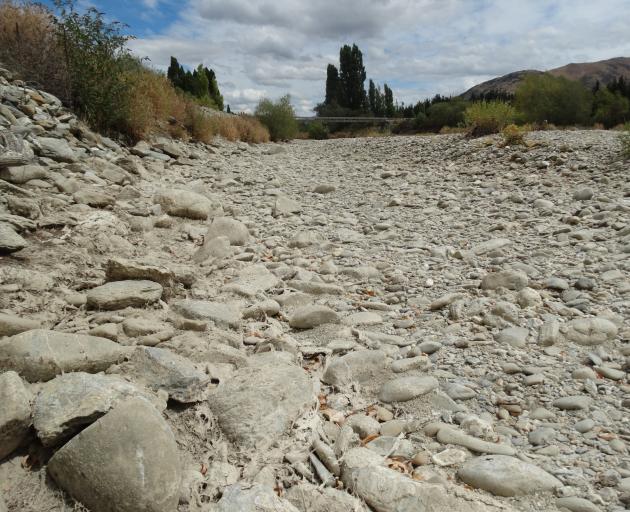 The Cardrona River on the north side of the Ballantyne Rd bridge is not a place to swim at the moment. Photo: Sean Nugent
Farmers across Otago are being asked to conserve water, with some rivers across the region dropping to their lowest levels on record.

ORC engineering, hazards and science director Gavin Palmer said some areas had particularly low rainfall and the present spell of dry weather, combined with little snow cap to augment river levels from snow melt last year, meant most Otago river levels were low compared to average levels for this time of the year.

''The Kakanui River was also much lower than normal at 57% less than its average flow.''

Dr Palmer said data collected this week showed the Lindis and Cardrona rivers were dry in some sections, and several other rivers were ''at or below'' their minimum low-flow level.

When rivers reached this level, the surrounding community and stakeholders agreed to control the amount of water taken from them, to maintain the health of the rivers.

Dr Palmer said the council was contacting the community this week, reminding people to actively monitor their takes.

''We're reminding people who irrigate that some rivers are below minimum low-flow levels, and to be mindful of their water-use consents conditions and responsibilities, and conserve water where possible.''

However, they were higher than average in North Otago, East Taieri, Roxburgh and Ettrick.

Niwa says Otago's weather is likely to be warmer than average for the next three months.