Rural policing team is on a road near you

The Alexandra-based rural drink-drive team, which travels across the Otago region, will be out in force this long weekend, carrying out checks on drivers and their vehicles and assisting local police. Balclutha reporter Helena de Reus joined the four-man police unit in Oamaru last weekend to see how the team operates. 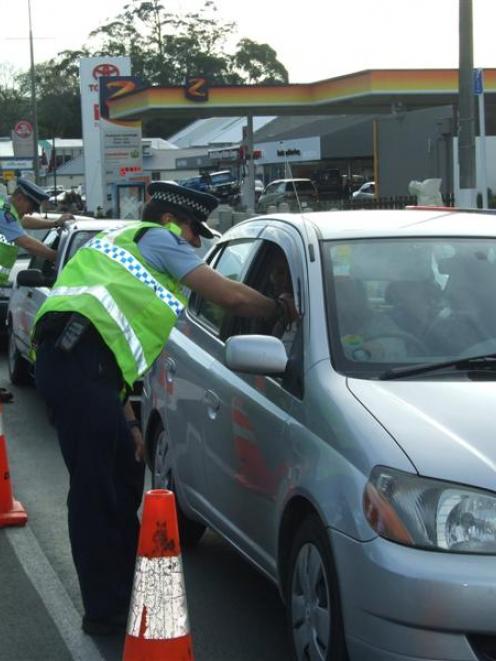 ''The majority of people we deal with are normal people who make a poor decision on the night.''

Over the years, there was an attitude change to drink-driving, with more people accepting of checkpoints and a growing awareness that it is not ''OK'' to drive drunk.

The team was created about five years ago, and is based in Alexandra, but regularly travels around Otago.

Team members work in rural locations, and are well aware of the challenges faced by rural police, Sgt Martin said.

After I get a quick safety briefing, the team splits in two, and drives off to patrol the streets of Oamaru.

Car after car is stopped, and officers breath-test the drivers, check they are sticking to the terms of their licences, and check the vehicles are roadworthy with warrant of fitness and licensing. At Maheno, we conduct a short checkpoint outside the local tavern just as a band finishes and vehicles start to leave. All drivers tested are sober, which Sgt Martin remarks is good to see.

Totara, Weston, Enfield, Ngapara are just a few of the rural areas visited by the team, with no drink-drivers, although a few motorists receive tickets for various infringements.

On Saturday evening, the team is ready for another night of keeping the roads safe.

A checkpoint is set up outside the police station in Severn St, and the drivers of nearly 800 vehicles are tested over two hours.

The ''booze bus'' is parked on the side of the road, rows of road cones set up to steer drivers into the checkpoint, and rumble strips to slow traffic.

The majority of motorists are tested without complaint, some congratulating police on their presence, while others exchange casual chit-chat.

The first person stopped in the checkpoint and required to have an evidential breath screening test is a Central Otago man in his 60s who is towing a horse float. His two tests come back at 400mcg, right on the adult limit.

The man tells me it is a ''great wake-up call'', and it is the first time he has been caught.

He got up at 5am, went to the races in Ashburton, ''had a few stubbies and something to eat'' and was on his way back to Central Otago.

While he is not over the legal limit, he is forbidden from driving for 12 hours.

One officer spies a car turning around to avoid the checkpoint. Quick as a flash, he runs to his car, and is off in pursuit, lights flashing and sirens wailing.

The officer returns with an Oamaru man in his late 40s who protests his innocence and confidently states he will blow under 400mcg on the evidential breath analyser.

In the back of the bus, his confidence never wavers, and when the result comes back at 811mcg, he simply shrugs his shoulders and says: ''You got me''.

Chatting to me while he waits for the mandatory 10-minute period to end before police can send him on his way, the man confides he thought he would be over 1000mcg.

When asked why he gets behind the wheel after drinking, he said each recidivist will have their own story, but none of them will be happy ones.

He has had some rough times in his life, he says, and moved back to Oamaru after the Canterbury quakes when he lost his job and home, prompting him to return to his home town.

He has nine previous drink-driving convictions, but the last was about 13 years ago. He is soon taken back to his home.

The checkpoint is dismantled, and the team returns to the streets after a quick dinner break.

During the weekend operation, three people showed positive excess breath-alcohol levels, but two came in at 400mcg - right on the limit - with the third at 811mcg. Two men were arrested following pursuits, and two people were caught driving while forbidden.

The team also helped Waitaki police with other jobs, and the operation was considered a success, Sergeant Martin said.

''The ideal operation is to stop lots of people and not have anyone drink-driving ... I'm still surprised people are still going out there and taking the risk.''

Legal limits
Breath-testing: 400 micrograms (mcg) per litre of breath for people over 20, zero for those under 20.

Blood-testing: 80 milligrams (mg) per 100 millilitres of blood for people over 20, zero for those under 20.

Drink-driving penalties
• Depending on the circumstances, including whether you have been caught before, currently if you are found drink/drug driving you can face a range of penalties including:
• Loss of licence for six months or more.
• Fines up to $6000 (up to $20,000 if you cause injury or death).
• Imprisonment up to two years (up to 10 years if you cause injury or death).
• Confiscation of your vehicle.
• Immediate 28-day licence suspension.
• Roadside licence suspension: Police can suspend driver licences on the spot if you refuse to have a blood test or if - following an evidential breath or blood test - you are found to have more than 130mg per 100 millilitres of blood, or more than 650mcg of alcohol per litre of breath.
• Alower threshold applies for some previous convictions.
• Your licence will be suspended for 28 days and you will still have to face court-imposed penalties.

Avoiding problems
''If you see friends or family members making a poor decision to drink and drive and putting the safety and lives of others at risk, then take action to stop this happening. There are a number of ways that you can influence people who make poor choices in relation to drinking and driving.''

• Be a responsible host.
• Create a plan on how to get home safely before heading out.
• Don't let your friends and family drink and drive.
• Talk to loved ones about drink-driving.