By Daisy Hudson
0 Comments
Twelve months ago Lake Ohau Village was devastated by a huge blaze that left physical scars on the landscape, and mental scars for those who called it home. Daisy Hudson returned to Ohau to see how residents have begun to rebuild in the wake of one of New Zealand’s worst fires.

Hugh Spiers still wakes up in the middle of the night, reliving the horror.

Much of that night is a blur. But he remembers the wall of flame racing towards Lake Ohau Village, buffeted by a roaring wind.

He remembers the mad dash to his car with little more than the clothes on his back, the fear of becoming trapped, the heat sucking the oxygen out of the air.

In the pre-dawn darkness he joined a convoy of cars fleeing the flames, passing the flashing red lights of fire engines heading in the opposite direction.

It was 12 months ago, but the terror is still fresh. 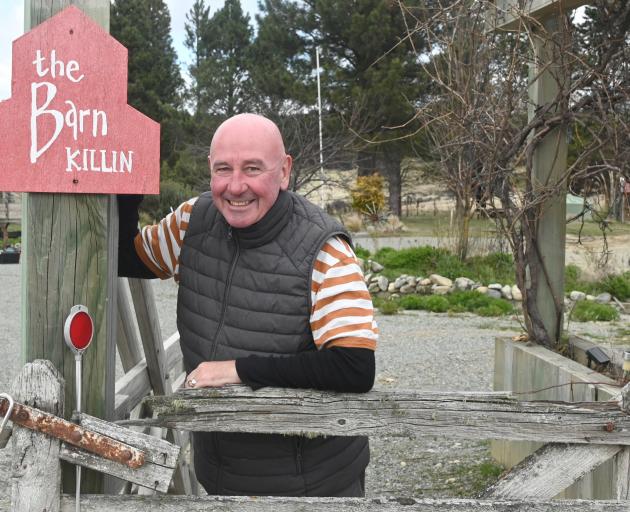 Hugh Spiers is looking forward to building work starting at the site of the former bed and breakfast he and his partner owned near Lake Ohau Village. PHOTO: CRAIG BAXTER

Forty-eight houses were destroyed by the massive blaze at Ohau on October 4 last year.

It took firefighters days to fully extinguish the 5000ha fire, one of the worst in modern New Zealand history.

Those affected are still waiting for answers as authorities grapple with a complex investigation.

Residents would later say it was nothing short of miraculous that everyone managed to escape the inferno.

A year on, Ohau is a changed place.

Picturesque roads running along the edge of the lake are now lined with charred stumps and burnt fenceposts.

Copses of stripped back trees scar the landscape like rows of bleached and blackened needles.

But amidst the harsh reminders of the devastating blaze, there are signs of life.

There are now three types of houses in the village — those that escaped the fire, shiny modern houses newly rebuilt and the frames of those in various stages of construction.

A sprinkling of tourists are parked up beside the lake, enjoying the spring sunshine on a bluebell day.

And dotted between the scorched branches and scrub are hundreds of seedlings planted by community groups, reclaiming the land. 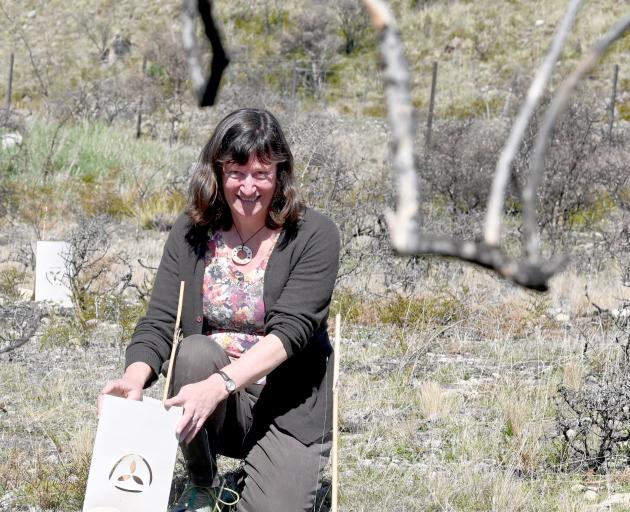 Ohau Conservation Trust chairwoman Viv Smith-Campbell says a huge number of volunteers have helped with replanting around the village in the wake of the fire. PHOTO: CRAIG BAXTER
For Mr Spiers, optimism is the key to moving forward.

He and partner Dwayne Rennie owned The Barn at Killin B&B, just outside the village.

The large building, plus outbuildings and several caravans were all destroyed in the fire.

‘‘The vision of the fire coming over the hill and the fact that we couldn’t get out, that still haunts you. It’s that ‘what if, what if’,’’ Mr Spiers says.

But the support the pair has received has been incredible.

Because their business had an international following through social media, they also heard from people all over the world.

‘‘A box of treasures from England came out the other day, some books, just random little things and random kindness from strangers.’’

They have spent the past year living in a rental cottage right beside ‘‘ground zero’’, as they call it, while Mr Spiers’ parents are in a relocatable prefab home on the site.

They had sifted through the ashes, but found little more than a few plates. The salvaged items are in boxes, ready to be turned into a mosaic project.

‘‘There were generations of treasures in the house that were lost.

‘‘I feel quite guilty about that because I was the custodian of it. But it’s only things.’’

They’ve been busy landscaping and getting the site ready for building work on their new home to begin. 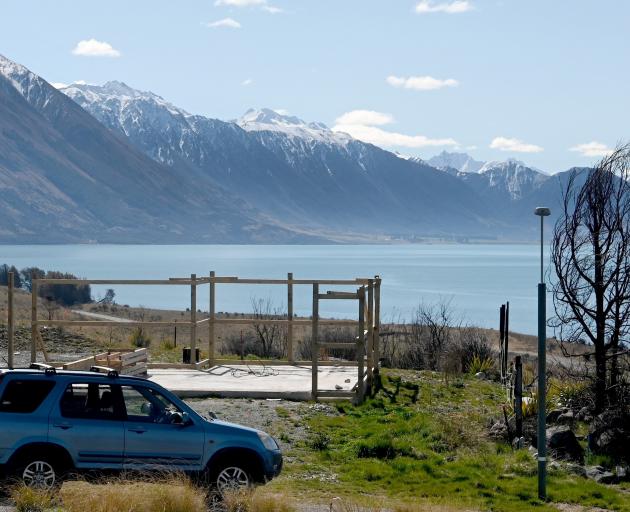 There are several houses under construction in Lake Ohau Village, as residents rebuild in the wake of the fire. PHOTO: CRAIG BAXTER
Poignantly, that was due to start on Monday, exactly a year after the fire. But work has been pushed back by about a week.

He is unsure how long the build will take, but hoped to be in the house this time next year.

‘‘We’ve bought a coffee machine with double shots, so we can get those builders going real quick.’’

Ohau had always been a tight-knit community, but there had been a sense of ‘‘them and us’’ between the holidaymakers and the permanent residents, he says.

The fire put an end to that.

‘‘As a group we’ve really gelled together and we’ve got to know people we didn’t know before,’’ Mr Spiers says.

‘‘The land was burnt that night, but the soul wasn’t taken away.’’

There are still plenty of triggers, from the smell of smoke from a burn-off to the sight of a fire engine with its lights on.

‘‘I think we’ve been pretty lucky that as a group, nobody’s going through it alone.’’

There were times they considered not rebuilding at Ohau.

But the sheer beauty of the land wouldn’t let them leave. 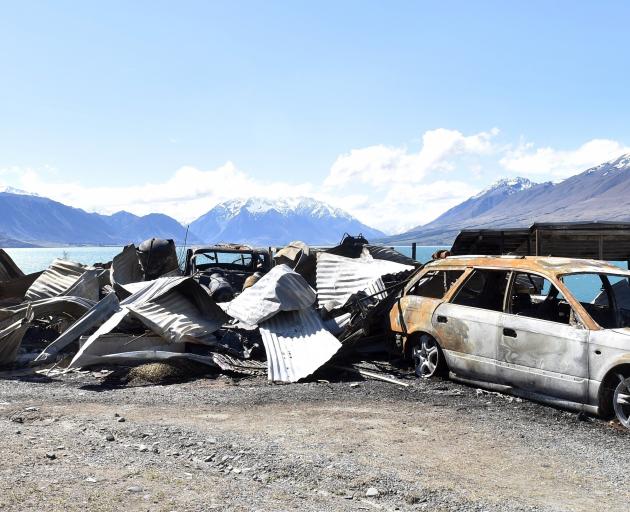 The huge Lake Ohau fire reduced houses and vehicles to burnt-out shells. PHOTO: PETER MCINTOSH
The cause of the fire is still to be officially determined.

It also came with a hefty bill, expected to be about $1.35million for the firefighting efforts.

A Fire and Emergency New Zealand spokeswoman says the investigation has taken ‘‘considerable time to finalise’’ due to the fire’s complexity, and a report is expected to be released in the next few weeks.

But it is believed factors contributing to its spread included severe winds, high temperatures, the terrain and vegetation.

That last point was the cause of much debate in the immediate aftermath of the blaze.

The Department of Conservation drew heavy criticism from farmers, local politicians and others in the community about the amount of fuel there was for the fire to burn through.

At the time of the fire, Mackenzie Mayor Graham Smith said he was unimpressed with the amount of vegetation on Doc land in the Mackenzie Basin, and called for better management.

The Ohau fire came about five weeks after a fire near Lake Pukaki, near Twizel, burned through more than 3500ha of land, much of it wilding pines.

‘‘Since the fire, the National Wilding Conifer Control Programme has continued with extensive wilding pine control in the Mackenzie Basin, including on public conservation land. The programme began before the fire.’’

Doc did not carry out a review of the fire.

Many of the trees that lined the roads around the village have been reduced to charred branches and logs, ready to be run through a mulcher.

But there are ongoing community efforts to return the striking landscape to its former glory.

A key group tackling the mammoth effort is the Ohau Conservation Trust.

Chairwoman Viv Smith-Campbell says the trust received about $60,000 in donations, including $33,000 from the Freemasons, to help with planting efforts in the area.

Over the course of four planting sessions last year they managed to get about 480 kowhai, tussocks, mountain beech trees and other scrubland species in the ground.

It was a huge task, especially given three of the trustees, including Mrs Smith-Campbell, were also dealing with the loss of properties in the fire.

Getting out into nature and volunteering has helped people move forward. As well as locals, visitors to the area have also chipped in.

Two wedding parties had even donated their time to volunteer with planting while they were at Ohau.

People have really got behind the community, from helping to remove debris to offers of counselling.

‘‘Many of us just felt they wrapped their arms around us. Isn’t that just Kiwis though? Whenever we have these terrible situations happen, people just stand up.’’

Mrs Smith-Campbell has been visiting Ohau for more than three decades, and lived there permanently for nearly six.

She loves the environment, and the community.

While the house she lives in was not affected by the fire, another house she owned was completely destroyed.

‘‘It had lots of my life treasures and my family’s treasures in it, so that was pretty devastating. Lots of old photos, photos of my children, things like that.

‘‘But I’ve just started working with an architect to build something new and that’s got me really excited again.’’

A get-together has been arranged for tomorrow morning on the shore of Lake Ohau to mark the anniversary. Residents and property owners will gather with representatives from Fire and Emergency New Zealand, including members of the volunteer brigades from Twizel and Omarama who were first on the scene.

Waitaki Mayor Gary Kircher says it will be a time to remember the bravery of residents and firefighters and to appreciate the regeneration of the village and surrounding area, both the built environment and the natural environment.

‘‘The past year has been one of ups and downs for the locals, as some have rebuilt, others have yet to do so, and some who have decided that they won’t be rebuilding.

‘‘Along the way, we have utilised the Lake Ohau Fire Mayoral Relief Fund to help property owners and to help clean up some of the remnants of the fire which were constant reminders of that harrowing night.

‘‘I know that the village and its people have a special place in the hearts of many who have been involved along the way, including myself.’’