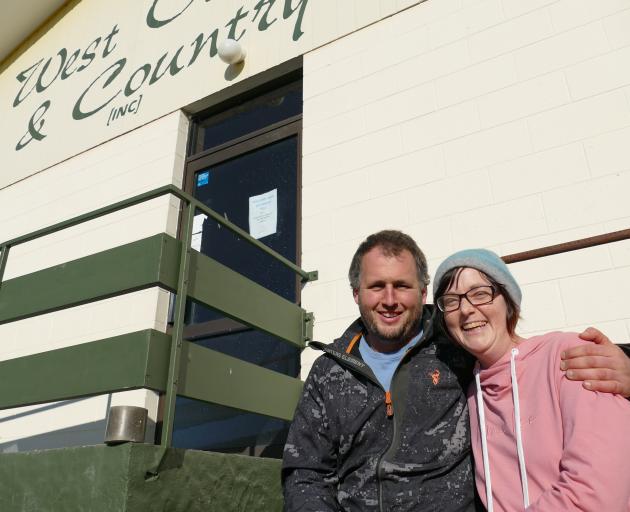 Kelso bowel cancer sufferer Leeana McKenzie and husband Carl are stunned by the generosity of the West Otago community, which raised more than $30,000 for their family at an auction held at the West Otago Town & Country Club in Tapanui on Sunday. PHOTO: RICHARD DAVISON
The joy of a new baby daughter was unexpectedly tempered with grief for a West Otago family this summer.

When Kelso primary school teacher Leeana McKenzie (40) gave birth to baby Annalise on November 19, complications meant she had to undergo a Caesarean section.

However, a history of bowel issues for the past four years — which doctors had passed off variously as irritable bowel syndrome and "piles" — had her concerned the unplanned C-section might have been down to something more sinister.

When she was admitted to hospital with recurrent diarrhoea in January, her worst fears were confirmed: doctors discovered an orange-sized bowel cancer tumour, also attached to her womb.

She said her main reaction, after the initial shock and shared tears with husband Carl and her two young sons, was anger.

"I’d been complaining of issues since 2016, and was continually told not to worry, and treated for other things.

"You know yourself when something’s not right, but the system seems back to front, and simply isn’t set up to catch younger patients with bowel cancer."

Mrs McKenzie and infant daughter Annalise share a joyful moment together at home this summer. Photo: MCKENZIE FAMILY/SUPPLIED
National bowel cancer screening began last year, but only for those over 60.

Mrs McKenzie said even though doctors had in part shared her earlier concerns about her symptoms, they had been reluctant to refer her for specialist diagnosis, as she did not fit the strict criteria for referral.

"By that stage, it could be too late."

A "bubbly, active" person by nature, the diagnosis of probable stage 3/4 adenocarcinoma had hit her hard both physically and emotionally, she said.

"This was meant to be my year off to be a full-time mum. I just want my life back."

However, she had been buoyed by family and community support.

That support included an auction organised by friends in Tapanui on Sunday, which had raised $30,000 towards transport and accommodation during her five weeks’ radiotherapy in Dunedin next month.

"They’ve been amazing, but that’s just what West Otago is like."

In the meantime, a desire to share in her boys’ — and baby Annalise’s — future is keeping her motivated.

"I want to watch them grow up. I’ll keep fighting."